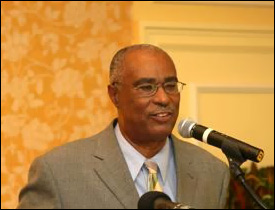 Premier of Nevis, the Honourable Joseph Parry expressed his sincere concern over the recent criminal activity on the island of Nevis.  The Premier raised these sentiments in an address to the nation Monday evening.

“I come to you at this time because of the great concern that has been expressed by so many people around the island of the criminal activity that we have been experiencing for the past six weeks.  In June, a young man was murdered on the streets of Charlestown. It created great concern among us because the people of Nevis are not accustomed to that kind of behaviour,” said the Premier.

According to the Premier, based on that murder, Police have increased patrol in the areas of Newcastle, Bath, Cotton Ground and Stoney Grove to ensure that there is no serious retaliation.

Since that murder, there have been a number of robberies in Nevis, some of which have taken place very early in the morning.

In an effort to address the concerns of residents, Premier Parry has held several meetings with the police, who have registered a strong commitment and renewed vigour in quelling unlawful behaviour on the island.

“There has been a great element of fear in the country and I feel we need to give assurance at this time. The people of Nevis cannot and must not surrender to their fears,” he said.

Hon. Joseph Parry also indicated that the police in Nevis are working closely with the police on St. Kitts; and said that he anticipated that over time, the police will be very successful bringing crime under control.

“Be vigilant; seek protection from the police whenever needed, he implored listeners. If you are dealing with money at night, have the police give you protection. They have told me that they are more than willing to offer the protection that our citizens crave,” he said.

The Premier ended by assuring all, that the Government is confident that this matter of crime will be controlled soon and that peace will continue to reign in Nevis.