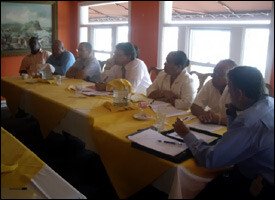 Prime Minster Hon. Dr. Denzil L. Douglas says Wednesday’s meeting with the St. Kitts and Nevis Chamber of Industry and Commerce as “frank and open and an exchange of ideas.”

“The Chamber has a right to be concerned with regard to security matters and wanted to be updated on a number of initiatives that the government had outlined and that is being pursued over the short and medium term,” Prime Minister Douglas told A.U. Browne of Kyss FM in an exclusive interview shortly after he visited St. Paul’s resident, Miss Mary Bradshaw who turned 107 years.

“I gave them an update on where we are on that. We are presently speaking with someone who is familiar with the environment here in St. Kitts and Nevis, but at the moment has a contract overseas, and we are trying to see how we can work around the existing contract. With regard to the team of advisors, who would be assisting us, first in understanding gangs and the dismantling of gangs and also in ensuring that there are alternatives things that our young people can do who maybe engaged in gangs or gang formation. We will continue to pursue that,” said Prime Minister Douglas, who is also Minister of National Security.

He disclosed that the Chamber officials were updated on the meeting which he co-chaired in New York with the United States Secretary of State, the Honourable Condoleezza Rice.

“We (Caribbean leaders) brought her up to date with the concerns that we are having here in St. Kitts and Nevis, as in the Caribbean region with the lack of support by that we are receiving from the Americans at this particular time and also of course how we can work together in a new initiative that is now being supported by the United States in tracking small arms which find their way into St. Kitts and Nevis and in the Caribbean and of course into Central America,” said Prime Minister Douglas.

Dr. Douglas said that he also informed the Chamber of the ongoing construction of the Co-Ed Juvenile Rehabilitation Center at Harris’.

“We outlined to the Chamber that that is a particular project that not only involves the construction of the facilities, but also to provide adequate training of those who would be detecting our students in schools – both at the primary and secondary levels – who have behavioural and attitudinal problems and would provide a new curriculum for their continued educational development,” Dr. Douglas told Kyss FM.

“We also touched on how the Chamber can assist in a number of initiatives of this kind and in particular we made reference to a programme that the Rotary Clubs of St. Kitts and Nevis are presently pursuing. Both the Chamber and my Government are being asked to support this imitative. We have given our full consent to support this kind of initiative,” said the Prime Minister.

“It was a frank meeting, a very open meeting with a frank exchange of ideas. We have agreed that we would continue to speak in an open and frank atmosphere. Being able to speak with each other from time to time on matters which confront not only the Chamber and the Government, but all of the people of St. Kitts and Nevis,” said Prime Minister Douglas.

Prime Minister Douglas was supported at the meeting held at the request of the Chamber by Attorney General and Minister of Justice and Legal Affairs, Hon. Dennis Merchant; Minister of State in the Ministry of Tourism, Sports and Culture, Sen. the Hon. Richard “Ricky” Skerritt; Chief Secretary, Mr. Joseph Edmeade and Permanent Secretary in the Ministry of National Security, Mrs. Astona Browne.