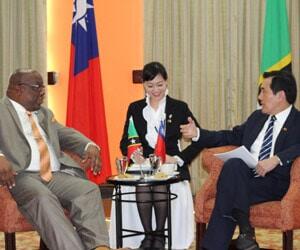 Prime Minister Dr. the Honourable Timothy Harris and a delegation will travel to Taiwan this week to attend the May 20th inauguration of the country’s first female president.  Tsai Ing-wen was elected as Taiwan’s president on January 16th, 2016.

The prime ministers commended the president for his many contributions while in public service, particularly as they relate to the strengthening of diplomatic relations between Taiwan and their respective governments and citizenry.

On March 14th, 2016, President Ma Ying-jeou visited Guatemala, where he met with President Jimmy Morales.  The Republic of China and Guatemala established diplomatic ties in 1933.

During a bilateral meeting with President Ma Ying-jeou on the afternoon of March 16th, 2016, Prime Minister Harris said that he looked forward to the inauguration.

“I look forward to witnessing the inauguration of the first woman president,” Prime Minister Harris told President Ma Ying-jeou, adding that, “You must take some credit for creating an environment in which all women are encouraged.”