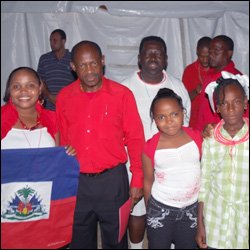 St. Kitts and Nevis Prime Minister Hon. Dr. Denzil L. Douglas has been outlining the need to have cooperation at the highest levels between CARICOM and Mexico on the issue of Youth Empowerment.

This message was conveyed by Prime Minister Douglas to host of the Mexico-CARICOM Summit in Cancun, Mexican President, His Excellency Felipe Calderon Hinojosa.

Dr. Douglas told President Calderon that Youth issues continue to take a very special place on the agenda of Caribbean Community members and that the Community is indeed encouraged by the fact that the World Youth Summit would be held in Mexico in August 2010.

He expressed to the President the desire of the Community to play a part in the development of the agenda for those meetings and a continued collaborative working relationship up to and beyond this Summit in the areas of Youth Development and Empowerment.

Discussions were also held on issues relating to the common challenges of both Mexico and the Caribbean Community.

Following opening statements from President Calderon, Prime Minister of Dominica and current Caribbean Community Chairman, Hon Roosevelt Skerrit, and the President of Haiti, Rene Preval, the first matter on the agenda was the crisis in Haiti.

Heads were engaged for quite some time on this matter during which Prime Minister Douglas took the opportunity to say to President Preval that the people of St. Kitts and Nevis have the people of Haiti in their hearts and that the Government will continue to do its best within its capabilities to support the long term reconstruction efforts and the current efforts being carried out to bring relief to the people of Haiti.

The Draft Declaration that was originally distributed to delegates was updated to include the commitment of Mexico and the members of the Caribbean Community to find an urgent solution to combat what President Preval outlined as the most urgent need of the people of Haiti.

This matter relates to finding shelter within the shortest time possible to be able to house the over one million people who have been left homeless and who are currently exposed to the constant and heavy rains in Haiti.

It was therefore decided that both through contributions of member states attending the Mexico-CARICOM Summit and the Unity Summit that some 200,000 tents would be purchased to help shelter that 1 million plus unsheltered Haitians.

Other topics discussed were Trade and Development especially in Services, issues relating to Transport, Tourism, Tax Cooperation, and Linkages with the Caribbean by Mexico, Energy Security and Climate change and Crime and Security.

Members of the Rio Group met in Cancun, which also saw the second summit of Latin America and the Caribbean.

Foreign ministers drafted a proposal over the weekend for the creation of a bloc of the Americas without the United States and Canada.

At the current summit, however, leaders were only expected to make a formal decision about the creation of the new organization. A taskforce was expected to be created to work on the details, with a view to actually launching it at the next regional summit, in July 2011 in Venezuela.

Calderon said such a new institution would allow Latin America and the Caribbean to project themselves at the global level “with renewed vitality.” Integration, he said, is “the most powerful means to reach higher levels of growth and development.”

Honduras was not invited to take part in the meetings, since its status remains undefined in the light of the June 28, 2009 coup that ousted Honduran President Manuel Zelaya.

The Central American nation was suspended from membership of the Organization of American States (OAS) in the wake of the coup, and it has not been reinstated despite the inauguration last month of Porfirio Lobo as the country’s new president.