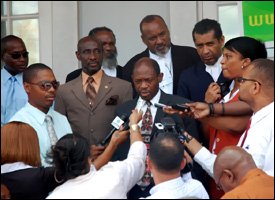 St. Kitts and Nevis‘ Prime Minister Hon. Dr. Denzil L. Douglas told Justice Rita Joseph-Olivetti Thursday that he had sought legal advice before exercising his constitutional duty under Section 50 (3) of the Constitution of the Federation of St. Kitts and Nevis.

Dr. Douglas said he had asked his Attorney General, Dr. the Hon. Dennis Merchant, whether a Court Order prevented him from laying the Constituency Boundaries Commission Report on the table of the lawmaking body.

“The Honourable Attorney General told me that he did not think so, but he would consult with the legal team representing him in this matter” Dr. Douglas told the Court during his 45-minute testimony.

“The Attorney General told me that the legal team advised him that the Order as drafted, does not prevent me, the Prime Minister, from performing my constitutional duty under Section 50 (3) of the Constitution,” said Prime Minister Douglas, who was subpoenaed as a witness by the opposition People’s Action Movement (PAM) Parliamentarian, the Hon. Shawn K. Richards and the party’s unelected Political Leader, attorney Mr. Lindsay Grant.

Dr. Douglas noted that the transcripts of the proceedings submitted were not Official Government Documents, he cannot say with certainty that they were accurate, but they does appear to be the remarks he had said.

He also said that the transcript of his remarks made at July 10th Press Conference and submitted by Mr. Hamilton might be correct although he could not say with certainty that it is accurate.

Dr. Douglas said the statement he made during a Labour Party political meeting at Lodge Project was accurate.

Under cross-examination by Counsel for the Attorney General and the Constituencies Boundaries Commission, Mr. Sylvester Anthony, Prime Minister Douglas disclosed he had sought legal advice from current Barbados Prime Minister, the Hon, David Thompson, St. Vincent and the Grenadines Prime Minister Dr. the Hon. Ralph Gonsalves and Leader of the Opposition in St. Lucia, the Hon.  Kenny Anthony.

Dr. Douglas said that on the day of the National Assembly meeting on July 8th, the Hon. Attorney General was in court and did not attend that session of the lawmaking body.

He reiterated also that the advice of the Legal Team was relayed to him by the Hon. Attorney General.

Dr. Douglas he knows Mr. Chesley Hamilton, the author of the transcripts to be a former Chairman of the opposition People’s Action Movement (PAM) and a failed candidate on two occasions.

Former Attorney General, His Excellency Ambassador Delano Bart held a watching brief for the Prime Minister during the testimony.