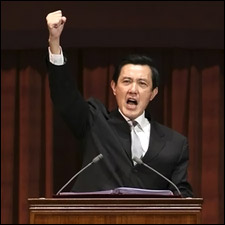 St. Kitts and Nevis‘ Prime Minister the Rt. Hon. Dr. Denzil L. Douglas has praised Taiwan’s President His Excellency Ma Ying-Jeou, who will be sworn in for a second consecutive term on Sunday, for strengthening bi-lateral relations with St. Kitts and Nevis.

In remarks Friday during a reception at the Embassy of the Republic of China (Taiwan) on Friday to celebrate President Ma’s inauguration, Prime Minister Douglas said the recent elections is an affirmation of Taiwan’s adherence to the most time-honoured of democratic principles ““ that the Government serves at the will of the people.

“It is an impressive and important affirmation of the people of Taiwan’s faith in the vision and leadership of President Ma Ying-Jeou, in general, and his astute management of the Taiwanese economy during this period of unprecedented global turbulence, for the safety and benefit of the Taiwanese people, in particular,” said Dr. Douglas during the ceremony attended by all Cabinet Ministers, the Speaker of the National Assembly, Permanent Secretaries and senior government officials.

Dr. Douglas said President Ma Ying-Jeou ensured, during his previous term, that relations between the Republic of China on Taiwan and its bilateral partners were not only steadfastly nurtured, but that they were, indeed, strengthened, in that spirit of mutual respect and sincere friendship.

The Prime Minister express regret that he is unable to attend the Inauguration on Sunday and deliver to deliver, in person, the best wishes of the Government and people of St. Kitts and Nevis.

“However, this weekend is the most important on the St. Kitts-Nevis Labour Party calendar, signaling, as it does, the holding of our annual conference, in which the leadership of our national Party is elected.  And as the Political Leader of the Party, I must be in the Federation at this time,” he said, pointing out that  he will be represented in Taipei by the Governor General’s Deputy of the Federation of St. Christopher and Nevis, Sir Edmund and Lady Hulda Lawrence.