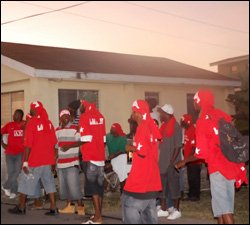 It is being dubbed “The Mother of All Motorcades.”

As the motorcade wended its way through St. Kitts, residents poured into the streets, danced and waved and greeted, hugged and kissed Prime Minister Douglas and all the candidates.

The Grand Finale ““ the final campaign rally is carded for Green Tree, Old Road at 8:00 p.m. on Sunday January 24th.