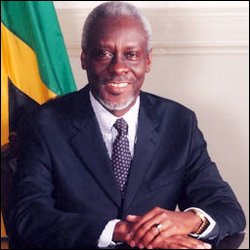 One of the Caribbean’s distinguished statesmen, is the keynote speaker at the Ninth Annual Prime Minister’s New Year’s Gala hosted by the Hon. Dr. Denzil L. Douglas on Saturday.

According to the Chairperson of the Gala Committee, Attorney at Law and former Speaker of the St. Kitts and Nevis National Assembly, Ms. Marcella Liburd, former Jamaican Prime Minister the Most Hon. Percival J. Patterson ON, QC, PC,O.E. has accepted the invitation to visit St. Kitts for the 2010 Prime Minister’s New Year’s Gala.

The Gala is a formal event that heralds in the New Year in the true spirit of unity bringing together people of all strata of society and the wider Caribbean.

“We in St. Kitts and Nevis have followed with great interest your rise from humble beginnings to the pinnacle of the political landscape, being the longest-serving Prime Minister in your beloved Jamaica. We have been inspired by your sharp intellect, your humility and your contribution to humanity not only in Jamaica but in the wider Caribbean and the world at large,” said Prime Minister Douglas in his invitation to the Caribbean statesman.

“As a symbol of hope and as a positive role model to our people, our youth in particular, in addition to your commitment to Caribbean regionalism, you are best qualified to share your insights and experiences with the people of St. Kitts and Nevis and the wider Caribbean at a time of so many global crises and challenges. Indeed our theme “˜One Family’ underscores the stark reality that we are in this together and that our best chances of survival rest in unity,” said the St. Kitts and Nevis leader.

The Gala will be held in the Grand Ballroom at the St. Kitts Marriott and Royal Beach Casino.