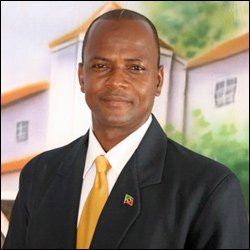 In his message to the youths of St. Kitts and Nevis, Junie “Scrape” Hodge said, “The vote that you cast will determine the future you select for yourself and family.”

Hodge, who is the People”s Action Movement (PAM) shadow Minister of Youth and Sports, noted that while the youths are faced with numerous challenges, they should be aware that their vote is one that has power and meaning. He however urged them to not sell their vote for promises or gifts, but rather to make a rational choice as their future lies in the vote that they cast on Election Day.

Hodge, who will be challenging Prime Minister Dr. Denzil Douglas in Constituency Six, expressed confidence at creating history in winning that seat. He said that many people have expressed the desire to see change and he is prepared and ready to deliver what they need.

Hodge lamented that a number of young people are being forced or lured to turn a blind eye to the many social ills occurring in St. Kitts and Nevis. He said that between the time the Labour Party was elected to office and now, the “will to resist and to unify against oppressive forces, which are also the enemy of all who dare to challenge the Labour Party”, has changed.

The former police officer stressed that systems are being eroded, people insulted and humbled in foreign lands, reduced to menial jobs and second-class status as they flee to other parts of the Caribbean, North America, Europe and Canada in search of jobs, due to the rapidly increasing unemployment in St. Kitts and Nevis.

He further noted that not only people who oppose the Government want them out, but also those that supported them in the past, as  the Douglas-led administration continues to fail in doing anything positive for the people, particular the young.

“The Prime Minister feels satisfied to have his people stagnated, as he wants to dictate who must and must not be successful and empowered. So I urge you to allow your vote to make that change so that irrespective of which party you support there can be development as each and every Kittitian and Nevisian has a right to opportunities in the land of their birth. It”s heartbreaking to see that our young people are leaving by any means necessary, as they seek betterment,” Hodge declared.

Hodge also questioned, “Why must we flee from the Federation of our birth, when together we can take back our Federation with just one vote as each of you young people can go out and cast your vote which will demonstrate your will and determination that no longer will we allow our future to be dictated and marred by the personal agenda of one man, who is bent on creating division and disunity among us,” he said.

He reminded that the young people should put crime and violence aside and focus on rescuing the Federation, so as to ensure that the future is secure and safe for their children. He appealed for them to demonstrate their maturity and responsibility by bringing the Douglas-led administration in “line”.

“I urge you the young people to find that will of standing up to the many adversities that you are faced with today and vote against a government that refuses to address your needs and concerns. You can do this by electing a Government that sees the issues of young people as priority, thus ensuring you can be empowered,” he said.

He concluded by noting that for the past 14-odd years, the Federation”s youths have been punctuated by many struggle for freedoms, equality and justice, adding that they should no longer give the Labou Party a ticket to continue destroying their future through the casting of their votes for them.