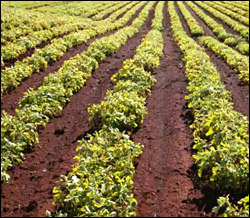 The Department of Agriculture has placed peanut production back on the front burner, with timely research assistance from the Taiwan Technical Mission.

The Republic of China Ambassador to St. Kitts and Nevis His Excellency Rong-chuan Wu said that the Technical Mission was conducting research on eight high-yield varieties of peanuts. At the time, the Ambassador was commenting at the start of a field tour of the Taiwanese Technical Mission demonstration farm at Needsmust. Farmers and media personnel were provided a full tour of the facility to see first-hand the range of research projects being undertaken.

Ambassador Wu expressed confidence that a high yield variety would be very profitable for farmers. Indicating that in a diversified economy, agriculture is still important in terms of food sustainability and food substitution, He said the Technical Mission agriculture research facility was committed to the assistance in the nation’s diversification of its agriculture in the pursuit of food sustainability in St. Kitts and Nevis, as the country addresses trade imbalances.

Ambassador Wu commented that it was possible to achieve higher production levels. “We have fertile land. We have people. We can grow everything here”¦Our intention is to collaborate with the St. Kitts and Nevis Government and people to improve agricultural production to enable the option of import substitution. Our idea is to help utilize the total area of agricultural lands in a way that attracts ambitious young farmers to do business on a full-time basis, as the sector works towards self-sufficiency and export opportunities.”

Permanent Secretary Dr. Hermia Morton-Anthony pointed out that the successful growing of peanuts is a significant goal of the Ministry of Agriculture, and it is especially relevant in the post-sugar era. “In 2005, the Department of Agriculture, then headed by Agriculture Adviser Dr. Jerome Thomas, produced a Post-Sugar Agriculture Plan, in which Peanuts, Pumpkins and Sweet Potatoes were identified as three main food crops to be grown by new farmers. These crops, I understand, are easy to grow, are highly nutritious, and there is a certain market for these produce.” Dr. Anthony expressed appreciation to the Government and people of the Republic of China for the continued strong support for growth and development of the Agricultural Sector in St. Kitts and Nevis.

Ambassador Wu presented bags of peanuts to two new farmers, James Thompson and Mr. Nisbett. The event was attended by farmers, representatives of agricultural agencies, the media, officials from the Department of Agriculture, as well as the new Speaker of the National Assembly, the Hon. Curtis Martin.