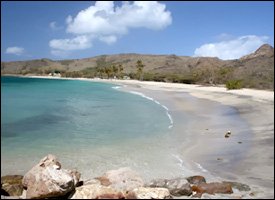 Progress is being made for the development of another five-star resort on St. Kitts’ Southeast Peninsula.

He said construction of the marina is schedule to begin in January 2010 and the resort in November 2010. The project also includes the several amenities including a casino, four restaurants, tennis courts and swimming pools.

According to Kanhai, the hotel, marina and the Park Hyatt Residences are to be completed by 2013 and the Marina Village and Estate Villas by 2015.