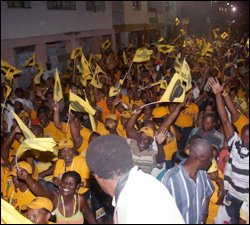 The People’s Action Movement is appealing to the general public to go out and vote come January 25th. The passionate appeal was made by Chairman of the Party, Sydney Osborne who at a meeting at the Basseterre Public market spoke of the importance of all registered voters going and cast their ballot. “You have to play a part in electing a government of your choice and therefore I urge you to go out early on Monday and vote, vote for Change, Vote for the People’s Action Movement,” he said.

Speaking about the importance of voting at the elections, Osborne said that the greatest power that the people posses is the right to vote noting that change can only be achieved if the people remain vigilant and steadfast stressing the importance of all to vote. “Don’t become complacent and say that PAM done win as we aint win until the last vote would have been counted so I don’t want anybody saying me aint going and vote because the party already win,” he argued.

He reminded the, that achieving Change is possible but noted the importance of them mobilizing others to go out and vote. He urged them to play a role f campaigning for the party pointing out that everyone can play such a role in garnering support. He said that the election cannot be won by just supporters of the party declaring that the support of some Labour supporters along with those who usually sits on the fence is vital towards achieving change.

Osborne further disclosed that there are reports of a number of irregularities and plans to have voter fraud by the Labour Party declaring that the fine stands at 30,00 XCD and or 5 years imprisonment. He issued a stern warning to persons guilty of engaging in voter fraud noting that under a PAM administration such acts would be corrected and eradicated.

“I want those persons who are living in one constituency and planning to vote in another, let me tell you that is a criminal offense and would took place in 2004 where Labour and Douglas hijacked the election it ill not happen again as we will not allow thee atrocities to take place,” Osborne added.

Osborne however lauded what he said has been the enormous and very significant work being done by a number of supporters in ensuring that people who d not reside in their constituency do not get unto the voters list. He sad that because of their vigilance and enormous determination it has resulted in several names being struck off the voters list stressing that come election day voters should demand and ensure that persons who should not vote in their constituency votes.

“They got to know that we aint standing up for no stupidness as this time aint like last time as we are more serious this time. So let me reiterate that persons who are planning on voting in constituencies that they aint register in to not go and vote there as we aint going to allow them to succeed with this a its fraud and illegal”.