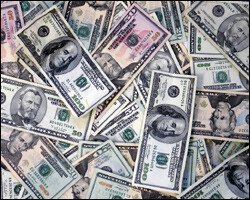 Show Us The Paystubs, Not The Money!

For many years the people of St. Kitts – Nevis have been speculating about the massive wealth and luxurious lifestyle of their Prime Minister and finally it now seems that some hard evidence is emerging that may shed light on the sources of Dr. Denzil Douglas’ riches.

As the political campaign heats up in St. Kitts and Nevis, the main opposition political party, the Peoples Action Movement,( PAM), at a massive rally of thousands of supporters on Tuesday night, (January 12th), held on the border of two of the hotly contested seats, unleashed a series of banking information from financial institutions located in St. Kitts & Nevis, the British Virgin Islands, New York City, London, England, Jamaica, and as far away as Kuwait.

Leading the charge was PAM’s political leader, the Harvard trained lawyer, Mr. Lindsay Grant, who exposed confidential bank receipts and other documents, listing transactions that ran in the high millions, covering a period that spanned most of Dr. Douglas’ 15 years in office, as Prime Minister.

During those years over EC$71 Million Dollars have passed through the account.

At present the position of Prime Minister of St. Kitts – Nevis, carries a salary of EC$17,000.00  and with some additional allowances it may peak at EC$20,000 a month or EC$240,000 annually. This means that in the 15 years as Prime Minister, Dr. Douglas’ earnings have been approximately EC$3.6 million.

This is why, said Grant, his Party intends to introduce new Integrity in Public Life Legislation and a Freedom of Information Act, within the first year of a new PAM government.

The accounts which have seen millions and millions of dollars moving through each year are in the name of the Prime Minister’s long time and current girlfriend Ms. Kate Alex Woodley, of 3265 Bainbridge Ave, Apt. B52, Bronx NY, 10467-3000.

Grant revealed that this same Kate Alex Woodley is the mother of Dr. Douglas’ children, namely his daughter, Dr. Andrea Douglas who is a trained Harvard medical practitioner and his son Denzil Douglas Junior who is also attending Harvard University.

At present Ms. Woodley is an employee of the federal government’s Ministry of Foreign Affairs, assigned to the St. Kitts & Nevis New York based Consulate Office in Manhattan.

The PAM leader further charged that the registered office of the company, Lex Consulting LLC is the private US home of Ms. Woodley. It was disclosed that Lex Consulting LLC, has no record of selling any type of goods or services, but on a monthly basis, hundreds of thousands of dollars keep rolling through the account.

Grant said that given Ms. Woodley’s occupation and legal total monthly earnings, there is absolutely no way that the accounts nor the shell company is truly her own. It is therefore obvious that other parties are involved and have vested interests in both the account and the company.

As our evidence will show, there can be no doubt that the Prime Minister himself has had payments from the accounts, made directly to him as well as others including one of his  Lawyers, Mr. Sylvester Anthony. so he cannot deny their existence.

It has been many years now since charges have been made at Prime Minister Douglas, who is reported to own approximately 16 properties in St. Kitts & Nevis and overseas.

Included among the list of those high end properties said to be owned by Dr. Douglas, is the huge building housing the residence for the ambassador of the Republic of China on Taiwan and another recently purchased in Calypso Bay, St. Kitt for US1.5 million dollars or EC$4,050,000.

This one property alone in Calypso Bay is of greater value than his entire government earnings in 15 years in office, but still he owns this and 14 more upscale assets in land and buildings. How is this possible, asked Grant?

Mr. Grant highlighted some of the glaring transactions involving huge sums of monies, that have been moving through these accounts, such as:

Using an audio visual presentation Grant showed pictures of actual receipts and documents that may be very hard to disprove by any responses from Prime Minister Douglas.

Grant challenged the Prime Minister to explain how he has managed to acquire so many properties and other personal wealth that far exceeds his earnings in salary, since in government.

The charge by the opposition party leader brings into sharp focus the all too familiar stories of Caribbean political leaders, who have been accused of using their power and position to boost their personal financial portfolios.

Mr. Grant, who is highly favoured to win his Constituency Number 4 seat, dared Prime Minister Douglas to explain the means of his multi millions.

Did his properties come from loans from our banks? If so, which banks?

The question we have to ask ourselves is, when would Prime Minister Douglas, provide the citizens of this nation with an explanation and response that would account for the $76 million dollars worth of transactions shown moving through the accounts, said Grant.