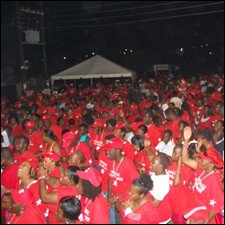 “The leadership of the governing St. Kitts-Nevis Labour Party has frowned on threats by Mr. Lindsay Grant of the Opposition People”s Action Movement (PAM) to prevent voters from exercising their constitutional rights on January 25th.

Deputy Prime Minister Hon. Sam Condor warned that the political life of each of the opposition candidates is on the line and they would not lie down and play dead.

“Be bold and brave. The PAM is going to try every trick in the book and out of the book. They have not changed their philosophy and so you must show your strength and stand up and protect the freedoms enshrined in the constitution with your life. This is democracy at stake,” said Deputy Prime Minister, the Hon. Sam Condor to a mass gathering of the governing St. Kitts-Nevis Labour Party in St. Paul”s on Saturday night.

He warned citizens not to take their eyes off PAM. “They know that they cannot win an election. They are the ones who make all the electoral rules we are now playing under and when we play by the rules that they make. They do not like it. They say that people from overseas can vote. We did not have that prior to the 1984 general election, but PAM which came into office in 1980, passed the necessary legislation that they want that. Now they do not want it anymore. They said and passed laws that people can vote where they are registered and register where they vote, now they do not want that.”

Prime Minister Douglas also reminded the huge crowd that they must vote where they are registered.

“No one can stop you. The law which the People”s Action Movement enacted in 1984, giving persons who live overseas the right to register and vote and those who are registered in a constituency the right to vote even if they have moved away and retain that right, must be respected even now that they (PAM) is in opposition,” Prime Minister Hon. Dr. Denzil L. Douglas told the huge crowd.

“Don”t let them fool you. They are coming with all types of propaganda. Not one man can prevent you from exercising your right to vote once you are registered,” said Dr. Douglas, who pointed to a certain religious radio station, which has been airing an announcement telling persons they are breaking the law by voting where they are registered.

“Comrades, fellow citizens, supporters of the Labour Party and PAM, the law says you must vote where you are registered and no one can stop you from exercising that right,” said Dr. Douglas.