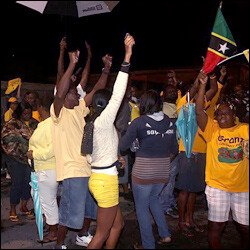 Leader of the People’s Action Movement (PAM), Lindsay Grant has issued a passionate appeal for the further strengthening of his party as they prepare to take over the reigns of government in 2010.

Grant was at the time speaking at the party’s last public meeting for 2009 which was held in Old Road. He told the massive crowd of party supporters that they need to vigorously continue the struggle of removing Dr. Denzil Douglas and his Labour Party from office.

The well attended meeting was dubbed “Dissolution Rally”, as the party hosted it in commemoration of the automatic dissolution of the Douglas-led Parliament. The Prime Minster, during a national address last Tuesday (Dec. 15) on ZIZ Television and Radio Stations, announced the dissolution of the National Assembly mere hours before it would have automatically dissolved.

Grant told his excited supporters that the dissolution of St. Kitts and Nevis Parliament marks a point of reflection for party members and all to note. He noted that the time has come for all, irrespective of their political views, to reinvigorate the PAM as it seeks to take over the reigns of Government that it lost in 1995. He stressed the urgent need for all to gather their fighting spirit in order to create a platform for social cohesion in forging growth and development under a PAM regime.

Grant said that while the people of St. Kitts and Nevis have been forced to live a very turbulent and challenging life for the past 14 years, they could and should be proud that the sacrifices they made would soon pay off with the electing of a Government of their choice, as they vote for change. He urged them to be proud of what they have been able to achieve, noting that when they achieve change in 2010 they would remember their efforts because of PAM’s vision and determination, as the party has been a champion of the working class.

Grant assured that he would continue to remain steadfast in ensuring that the atrocities of the Douglas-led administration don’t continue. He also declared that PAM’s objective is to end the dictatorship of the Government of the day.

The Political Leader attested that he and his party are very thankful for the significantly great courage and strength of character demonstrated by the partyÃ¢â‚¬Ëœs supporters over the years. He also thanked them for working tirelessly to ensure success at the polls. He said that their efforts were greatly appreciated especially at such a very a difficult time, adding that they continue to seek ways of bringing about unity within St. Kitts and Nevis irrespective of one’s political and or social views.

Notably, Grant said, despite the discrimination and victimization orchestrated and executed by Douglas and his administration, supporters of his party have remained vigilant and committed, as they believe in being loyal in an effort to alleviate the struggles of the ordinary and working people.

Federation’s first Prime Minister, Dr. the Right Honorable Sir Kennedy Simmons, said that it was Dr. Simmons who built the foundation for the development of St. Kitts and Nevis. He said that the contributions made by PAM and Dr. Simmons from 1980 to 1995 should be an eye opener and a motivator for political and economic freedom.

He gave the assurance that under his leadership he would remain a forceful, committed and dedicated leader as he continues his fight of seeing the back of Dr. Douglas and the Labour party. “He is the outgoing Prime Minister and I warn you that if you think things are bad, give the Labour Party another five years and you will see what will become of you and this country of yours,” he warned.

Grant challenged supporters and friends of PAM to follow the footsteps of their early leaders, whose vision was based on reality and represented the needs of the Federation. He noted that come January 2010 they would be delivered from bondage and sufferings that have been effectively inflicted by the Denzil Douglas administration. He issued a passionate appeal to all to maintain and sustain the vision, struggle and commitments of the party for a just and progressive St. Kitts and Nevis, noting the urgency and importance of bringing about change.

Grant contended that the citizens and residents of the Federation have much to be grateful to Dr. Simmonds, for it was under his leadership the foundation for several of the country’s initiatives, projects and programmes were initiated, which are now being abused and claimed by the Labour party as theirs.

“The question we need to ask them is, what have they done other than slipping this country into a three billion national debt, out of control crime and violence, increased poverty and the collapse of a  number of programmes which were not well thought out before they implemented them, among others? The record is very dismal and there are countless reasons to elect a new government,” Grant declared.