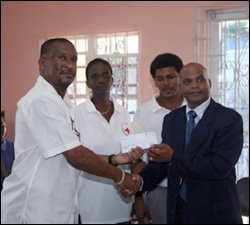 In a simple ceremony at the local headquarters of the Red Cross the executive of the St.Kitts Opposition party the People’s Action Movement made a donation to assist with rebuilding efforts in earthquake ravaged Haiti. The event took place on Thursday 25th and was attended by executive members of the party, Red Cross staff and local media.

After short presentations by party chairman Mr. Sidney Osborne and political leader Mr. Lindsay Grant, the cheque was handed to head of the Red Cross Dr. Reginald O’Loughlin. Dr. O’Loughlin commended the party for its support and expressed appreciation on behalf of the people of Haiti.

The People’s Action Movement’s “Strength of a Woman” Haitian Releif concert was the first event held in St.Kitts to assist in the relief effort in Haiti after the devastating earthquake that has claimed upwards of 250,000 people.