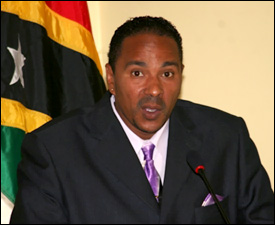 His advice for the nine-member grouping came on Tuesday evening, when he delivered an address at the official opening ceremony of the 14th Ministerial EPC meeting at the Mount Nevis Hotel.

He also urged them to take full advantage of the EPC in order to promote a better understanding of environmental management issues, the importance of the island’s sustainable development and to bring those matters to the attention to their Heads and Cabinets.

Notwithstanding, Dr. Darroux acknowledged the region’s progress to mainstream environmental management across all walks of life. He told the  Ministers of Environment they had every reason to be proud of the accomplishments to date but there was still much work to be done, it they were to incorporate environmental considerations into the economic development portfolios of their countries.

However, he said in spite of the advances made, the region faced challenges that had become more complex.

“The question then remains, are we providing sufficient resources to the agencies charged with dealing with environmental issues both at the national level and as a region?

“The relationship between sustainable environmental development and the growth and well-being of our population cannot be overstated and our focus should be on sustainable development, of which, a critical component is the improvement in the quality of life of our people,” he said.

Dr. Darroux noted that the development environment of the region was rapidly changing. Some had transitioned or were in the process of doing so from an agricultural based economy to a service oriented one, with tourism as the lead growth sector.

That shift he explained, posed peculiar challenges for sustainable development, given the dependence of Tourism on the physical environment.

Therefore, the Outgoing Chairman said, more care and attention had to be given to the physical Ppanning development concerns, if the governments were to become responsive to public and private sector investments and the need for sustainability.

He said the region was no closer to reducing its dependence on external energy sources, though it had implemented initiatives which promoted the adaptation of renewable energy as an alternative to expensive fossil fuels and created an energy management regime which enabled the region to become more competitive. Instead, they continued to be subject to the high cost of energy and its impact on the environment which he said, continued to be a burning issue for Member States.

Dr. Darroux also pointed to the need to develop and protect the region’s water sector He disclosed the a recent World Bank Study on “Institutions Performance and the Financing of Infrastructure Services in the Caribbean” stated a general dissatisfaction with water services in the region.

He said it was critical to the island’s economic and social development that they provided safe and uninterrupted portable water supplies to the populace.

“This means greater focus on the resource base of that sector such as our ground water areas; policies as it relate to portable supplies; distribution networks and the ever critical storage systems even in counties like Dominica with abundant fresh water sources. All this should result in good clean, safe drinking water,” he said.

With regard to the need for poverty alleviation, The Outgoing Chairman said each island had its own unique cluster of natural resources which should be utilised meaningfully and sustainably for the development of the region’s economies.

Dr. Darroux also stressed the need for continued work towards poverty alleviation through the introduction of sustainable livelihoods, the creation of opportunities for youths and other disadvantages groups and assistance to farmers in the adoption of sustainable farming techniques, so as to increase their farm productivity and to help attain the island’s goal of food security.