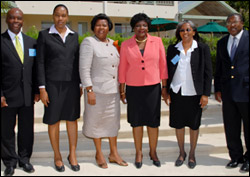 Attorneys-General from the Organisation of Eastern Caribbean States (OECS) have been urged to be relentless in the execution of their duties as watchdogs of their respective legal systems.

Speaking on behalf of the Government at a ceremony that marked the opening of the 14th Organisation of Eastern Caribbean States (OECS) Legal Affairs Committee meeting in Tortola, British Virgin Islands Deputy Premier and Minister for Health and Social Development Hon. Dancia Penn, OBE, QC told delegates they have a significant responsibility in the ongoing development of their respective nations.

“Part of the short message I would wish to leave is to urge you as attorneys general – guardians of the public interest and principal legal advisors to our governments – to be firm, to be relentless, to be fair as you work to strengthen our legal systems and our execution of governance at every level,” she said.

The Deputy Premier and former Attorney General and Deputy Governor also noted the historical and cultural ties that exist in the sub-region, and reiterated statements by the BVI Premier, Ralph T. O’Neal, OBE, which called for the BVI to continue a policy of cooperation with its Caribbean neighbours.

The Deputy Premier said she was pleased that one topic of the meeting would be model family law.

“Different though we may be, similar are our problems. And many of these problems lie in the societies that we inhabit, and they are very much impacted by the strength or the weakness of the social infrastructure in our respective jurisdictions. Matters of family law are critical in that regard, and we as a government certainly look forward to the work that this committee will ultimately produce and redirect to our Heads,” the Deputy Premier said.

British Virgin Islands Attorney General Hon. Kathleen Quartey welcomed participants and said the conference marks another milestone in the history of the OECS.

She noted that it is the mission of the Legal Affairs Committee to compile and review model legislations on topics that are common to and germane to the national aspirations of OECS member states.

“Whereas we seek a measure of harmonization, there is scope for tailoring these laws to our various domestic needs,” the Attorney General said. “It is said that two heads are better than one, and so this hydra of attorneys general should augur well for a very successful meeting.” Hon. Quartey was elected chairperson by the meeting.

OECS Legal Affairs Officer Mrs. Turkessa Benjamin-Antoine also addressed the conference opening. She noted that the OECS family law project began in 2002 as a joint project of the OECS and the Eastern Caribbean Supreme Court.

St. Kitts and Nevis Attorney General and Minister of Justice and Legal Affairs, Hon. Dennis Merchant was among Attorneys General from Dominica, Anguilla and St. Vincent & the Grenadines attending the conference, which was held at Long Bay Beach Resort from June 5-6.