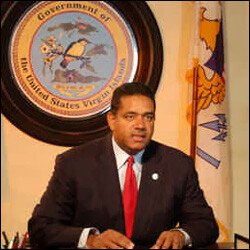 Eastern Caribbean leaders welcomed the Governor of the United States Virgin Islands, the Hon. John P. de Jongh Jr. and engaged him in discussions on closer functional cooperation between the OECS and the USVI.

Noting that the USVI and the OECS share similar challenges and similar areas of growth, the Governor expressed a strong interest in building a partnership between the two groups.

The Authority noted the areas proposed for cooperation in a draft Memorandum of Understanding and mandated the Secretariat to work with the Governor’s Administration in Charlotte Amalie to finalise the document.  Areas outlined for collaboration include tourism, with special focus on airlift and cruise ship activities; historical preservation and archives; sports; educational opportunities, especially at the University of the Virgin Islands which already has a large OECS student body; cooperation in Emergency Management; sharing health facilities, in particular the USVI’s new cardiac and cancer centres; environment, with special focus on climate change and preserving coral reefs as well as arts and culture.

The areas of trade, agriculture, security, including closer collaboration among police services against cross border criminals were also discussed.