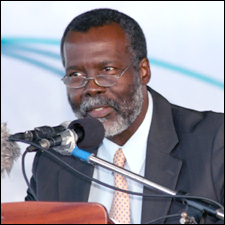 Harnessing the wind to generate electricity that will drive the wheels and engines of the economy was an exciting development of the Federation of St. Kitts and Nevis. That view was expressed by Organisation of American States (OAS) Representative for St. Kitts and Nevis Mr. Starret Greene at a ceremony to launch the official start of the WindWatt Wind Farm on Friday at Maddens Estate in Nevis.

He said Nevis’ move toward renewable energy was the right thing to do in an era in which the development of alternative and cleaner forms of energy was the number one priority for developed and developing countries on every continent and in every region of the world.

“Taking action to make our economy more efficient, modern and competitive is not only the right decision moving forward but also it is a momentous act that lays the foundation for long term growth and development of this island and by extension the Federation well,” Mr. Greene said.

The OAS Representative commended the Nevis Island Administration (NIA) and the people of Nevis for what he termed was a milestone achievement which had many implications for the island.

“This is a local accomplishment with numerous implications for the revolutionizing the energy sector at the Local Federal, Sub-Regional and Regional levels. Today marks a proud moment for all the people of St. Kitts and Nevis, as this wind farm signals the first step towards reducing the Federation’s dependence on the use of fossil fuel to meet its energy needs,” he said.

Mr. Greene also pointed to the social and economic benefits of the energy generating project, among them the opportunity for job creation; the acquisition of new skills for this and future generation of workers and it would win support from the citizens in both St. Kitts and Nevis.

He said it was hard to argue against an electricity generating project that was environmentally friendly and would be far less expensive to operate than the use of fossil fuel.

“Taking the lead in this region in the production and use of alternative and renewable sources of energy speaks not only to the creative thinking of our elected officials and technocrats but it also places this small island in the perfect position to attract inward investment into an emerging energy sector,” he said.

Mr, Greene added that the wind farm project set the stage for the forging of partnerships with countries and companies that had a proven track record of developing, distributing and using alternative sources of energy. These partnerships he contended had the potential to bring untold benefits to Nevis and to the Federation as a whole.

Meantime, the OAS Representative used the opportunity to register his Organisation’s satisfaction with the long collaboration with St. Kitts and Nevis, in the pursuit of sustainable solutions for the energy challenges which they faced.

The initiatives included the OAS’s support for the preparation of a National Energy Policy already on the way, the investigation and sequent legal and policy support for the geothermal project on Nevis and the wind project that has benefited from critical technical and legal support through the expert advice and counsel of Mr. Cletus Springer, Mr. Mark Lambrides, Mr. John Armstrong and Mr. Kevin de Cuba.

Mr. Greene said the expert’s collaboration with members of the Nevis Island Administration and other key public figures had been instrumental in making the historic energy project a reality.