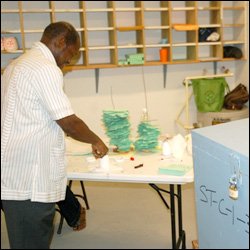 The Organisation of American States (OAS) Observer Mission, which monitored the January 25th General Election is recommending changes in the constituency boundaries to make them more equal.

CUOPM notes that the recommendation comes in the wake of court challenges by the opposition People’s Action Movement (PAM) and Concerned Citizens Movement (CCM) to prevent the Constituency Boundaries Commission (CBC) to present its report to the Prime Minister prior to the January 25th poll.

“Electoral reform in St Kitts and Nevis also involved an attempt to redraw the Electoral boundaries, to make these more equal. However, this matter remains unresolved. All of the parties with whom the OAS Mission met agreed that this issue should be revisited.  The OAS Mission agrees and recommends that the boundary question be addressed as soon as possible and should include all of the political parties represented in the Federal Parliament,” said in a Preliminary Report.

The Mission used the opportunity to issue what it regards as important points.

Likewise, the counting of the ballots proceeded slowly due to the fact that all of the ballot boxes had to be transported to a centralized location in the constituency.  The OAS Mission recommends amending the electoral law to allow for the Presiding Officers to conduct a preliminary count of the ballots at the polling station upon the conclusion of the voting.  The final count for each constituency could then be verified by Returning Officers the following day. This procedure, common elsewhere in the Caribbean, could make the count faster and more transparent.

Opposition leaders informed the OAS Mission that they had presented objections to names of persons who did not reside in their constituencies.  According to these political leaders, these objections were accepted and should have resulted in the deletion of the names from the list, but did not.   While it is not the role of the Mission to verify the veracity of these claims, it encourages the parties presenting the allegations to provide evidence to the appropriate authorities of St. Kitts and Nevis for further investigation.

The process of electoral reform in St Kitts and Nevis, begun in 2006, included re-confirmation of voters. Despite this effort, many disputes about the residency of voters arose.  The Mission recommends a house-to-house verification process before the next election.

The OAS Preliminary Report stated that most polls opened promptly at 7 am and, by 7:15 am, all were fully functional.  Presiding officers, poll clerks and party agents were present at their assigned sites and followed procedures diligently in accordance with election laws.  These dedicated officials worked harmoniously throughout a long day and impartially instructed electors on the process for voting. Sufficient electoral materials were available in all polling stations and the necessary information was visible. The secrecy of the ballot was maintained.

Despite the rain, voter turnout was very high.   Lines were long and many voters had to wait four hours or more to cast their ballots.  For the most part, voters waited patiently despite the trying circumstances.

The Mission heard complaints that, when applied, the indelible ink appeared diluted and could be easily removed.  With the permission of the Presiding Officers, several OAS observers placed their fingers in the ink and tried immediately to remove it.  Despite their efforts, the ink quickly deepened in colour and permanence.

In addition to the indelible ink, other safeguards to avoid double voting and voter misrepresentation were in place.  Presiding officers identified electors by asking them their name, address and occupation in the presence of the party agents who verified that information on their respective lists.  Electors were also asked to produce identification and most presented their voter identification cards.  The identifications were cross-checked with a photographic list of registered voters.

According to the Preliminary Report, some party agents claimed that certain voters did not reside in their respective constituencies, although their names appeared on the voters list at the polling station as well as the party agents’ lists.  In some polling stations, the presiding officers administered an oath to the voters in question, asking them to swear or affirm that they resided in the constituency where they were casting their ballots.  In those cases observed by the OAS Mission, these voters complied.

Police were present in all of the polling sites, efficiently and unobtrusively maintaining security. In some areas, such as St. Paul’s and Sandy Point, citizens became agitated because of the alleged nonresident voters casting their ballots.  The police and the St. Kitts Defense force effectively and peacefully controlled these potentially volatile situations.

The OAS Observer Mission said a final report with more detailed observations will be presented before the member countries of the OAS Permanent Council.