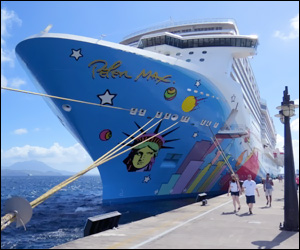 According to the Norwegian Cruise Line (NCL) Website, the 2,394-passenger Norwegian Gem has Port Zante on its Eastern Caribbean and Southern Caribbean Cruise from New York in 2014 and 2015.

The 4,000 passenger Norwegian Breakaway berths at Port Zante on January 4th 2015, January 18th and February 1st 2015 during its 12-day Southern Caribbean round trip from New York.

The Norwegian Gem is the fourth of Norwegian’ Jewel-class, preceded by Norwegian Jewel in 2005, and both Norwegian Jade (originally Pride of Hawaii) and Norwegian Pearl in 2006.