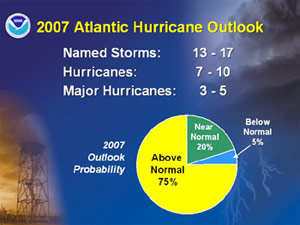 The outlook calls for a very high likelihood of an above-normal hurricane season, with 13-17 named storms, 7-10 hurricanes, and 3-5 major hurricanes. The likely range of the ACE index is 125% to 210% of the median. This prediction signifies an expected sharp increase in activity from the near-normal season observed in 2006.

The prediction for an above-normal 2007 hurricane season reflects the expected combination of two main climate factors: 1) the continuation of conditions that have been conducive to above-normal Atlantic hurricane seasons since 1995, and 2) the strong likelihood of either ENSO-neutral or La NiÃ±a conditions in the tropical Pacific Ocean.

An updated Atlantic hurricane outlook will be issued in early August, which begins the peak (August-October) of the hurricane season.