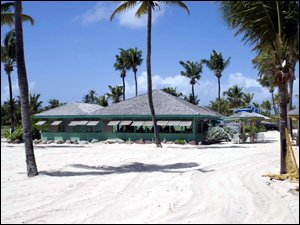 David Dodwell, the owner of Nisbet Plantation Beach Club on Nevis and hotel industry veteran, has just been named the 2010 Caribbean Hotelier of the Year ““ the highest professional honor given by the Caribbean Hotel & Tourism Association. Peter Yesawich of Ypartnership presented Dodwell with the award in front of an international audience of hospitality leaders and tourism officials at the 2011 Caribbean Marketplace in Jamaica.

Dodwell, who has more than four decades of hospitality career experience and also owns The Reefs ““ a renowned beachfront hotel in Bermuda, was honored by the Caribbean Hotel & Tourism Association for his achievements in the areas of hotel operations, food and beverage, marketing, property maintenance, staff training and motivation as well as his commitment to the environment and the St. Kitts and Nevis community. He becomes the 33rd recipient of the distinguished golden conch shell and joins an elite list of the most accomplished hotel leaders in the Caribbean.

“I can think of no one who has earned this recognition more than (Dodwell) has,” stated Senator and the Honorable Richard “Ricky” Skerritt, Chairman of the Caribbean Tourism Organization and St. Kitts and Nevis’ Minister of Tourism and International Transport. “He has made a tremendous difference in the hotel sector on St. Kitts and Nevis, and has contributed significantly across the region and in tourism everywhere.”

A graduate of the prestigious Cornell University School of Hotel Administration, Dodwell purchased Nisbet Plantation in 1989. Under his leadership and with his dedication to providing exceptional personal service, Nisbet Plantation has gained international attention with many industry awards. In fact, both of Dodwell’s properties have earned #1 spots on prestigious lists ““ Nisbet Plantation debuted on the 2011 Travel + Leisure 500 as the #1 hotel in the Caribbean, Bermuda and Bahamas, and The Reefs was the #1 hotel in the Atlantic in the 2010 CondÃ© Nast Traveler Readers’ Choice Awards for the second year in a row.

During the economic downturn, many hotels were reducing amenities. However, Nisbet Plantation expanded its offerings to include scooters, kayaks, sailboats, Flip digital video cameras, complimentary Wi-Fi and more. Dodwell was also recognized for his focus on the staff and Nevis community.

“David has been extremely proactive in his support and development of the people of Nevis. He is a big believer in investing in his team,” comments Jamie Holmes, General Manager of Nisbet Plantation Beach Club. His standout efforts have also included cross-training the Nisbet Plantation staff at The Reefs in Bermuda, involving the team in decision-making and promoting the local economy by employing Nevisians, utilizing local produce and seafood, and adopting a local primary school.

Mr. Dodwell is actively involved in community service and promoting tourism. He is a Member of the Resort Committee of the American Hospitality & Lodging Association, and has served as President of the Bermuda Hotel Association and Bermuda’s Minister of Tourism among many other leadership roles.