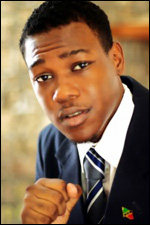 The newly elected President of the St. Kitts and Nevis Students Association Cave Hill (SKNSA CHILL), Mr. Azard Gumbs is reiterating the need for students to unite and provide support for each other during their years pursuing higher education overseas.

Mr. Gumbs who is also a Commonwealth Youth Ambassador told SKNIS that the new members of the executive team elected at a February 15th  election, were all excited about their role in keeping their peers motivated and confident. He added that their objective was to promote the Kittitian-Nevisian identity, culture and talent on campus and to foster greater integration among its members and those of other Island Associations.

Mr. Gumbs explained that while the Association has several activities planned throughout the year, they are actually a means to achieve the mentioned goals.

Azard said as the new Executive takes office, the first event on the agenda is the Annual SKNSA Awards and Farewell Dinner for members who are in their final semester of The University of the West Indies, completing their respective programmes.  He said, as is customary the executive looks forward to hosting a  (soon to be announced) high-standing public figure from the Federation as its featured speaker for the event.

“SKNSA CHILL will work closely with the Guild of Students to ensure that the Federation’s students attending UWI will have one of the greatest experiences for the few years spent here at the Cave Hill Campus. We urge the support of the general public as the Association grows from strength to strength,” said Gumbs in his concluding statement to SKNIS.

The Cave Hill Campus is located in Barbados.