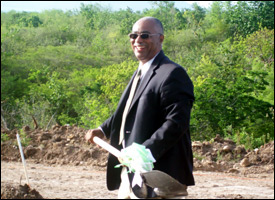 Nevis’ Premier, the Hon. Joseph Parry, says  Live Nevis Development Ltd. situated on the slopes of Nevis Peak, overlooking Cades Bay is a very desirable area for villa development and a significant investment on the island of Nevis.

Speaking at the groundbreaking ceremony to mark the occasion, Premier Parry said the investment represents confidence in the Nevis Reformation Party (NRP), the people and the economy of Nevis.

“I am satisfied that the people of Nevis would not let you down; they have a great reputation of being friendly, warm and hard working,’ the Premier told the investors.  He reminded the gathering that the first established five”“diamond hotel in the Caribbean, the Four Seasons Hotel,  was built in Nevis, under the Nevis Reformation Party in 1991; and had, within two years of it being opened, achieved the status of a five diamond resort.

Premier Parry went on to point out that even though some parts of the Caribbean are suffering from the effects and impact of the recession in Europe and America, there is still five percent of the Caribbean that is still competitive world ““wide and in that five percent is Nevis. “I am satisfied that you will do well here on this island,” he said.

During the ceremony, Premier Parry outlined some of the achievements of the Nevis Reformation Party (NRP) led Nevis Island Administration (NIA) within the last two years such as the new roads, the improvement to the water system; and the exploration of geothermal on Nevis which will bring cheaper, renewable energy to the residents of the island.

A number of new investments will come to the island and Premier Parry said he welcomes them.

“As we move into the New Year more and more projects will materialize on this island, which will change the face of Nevis,’ said Premier Parry. ‘We have said as a government that we intend to create a revolution; and that we will,’ he mused.  ‘Our intention to change the island is to the benefit of investors and all the people of Nevis; and I have always said that if the country moves forward, the people must move forward as well,” said Premier Parry.

During the ground breaking ceremony, Live Nevis Development Ltd made contributions to Deputy Premier, Hon Hensley Daniel and to Mrs. Cherrill Field on behalf of the Nevis Girl Guides.

“I say safely, that we are happy with the relationship that LiveNevis Ltd. has garnered with the local people, local sports and the upcoming 25th Independence Anniversary activities,” said Premier Parry.

The first phase will see the completion of about 14 villas, which will be available for purchase as residential units, or to be placed for rental with the LiveNevis Developments Rental Company to maximize the investment, while maintaining complete control of desired terms of use.