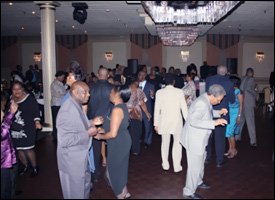 Dancing At The NEVCAN 2009 Dinner

A call was made to Nevisians resident in Canada by a Minister in the Nevis Island Administration (NIA), to protect their culture despite the advent of the information age, which had infiltrated every area of human existence.

Hon. Robelto Hector who stood in for Premier of Nevis Hon. Joseph Parry, made the appeal when he delivered the keynote address under the theme “Cultural Integration of Our Children” at the NEVCAN Cultural Association’s Annual Fall Dinner and Dance in Toronto Canada on October 10, 2009.

The event which was held at the La Contessa Banquet Hall attracted a number of Nevisians including 2009 State Scholar Ms. Sashia Godet.

“The extent to which information technology has penetrated our lives and the globalisation of our economies that has made us more independent as capital, people, goods and services move freely across borders, it still remains possible to protect our culture and the way of life to which we have become accustomed to,” he said.

Mr. Hector noted that it was incumbent on parents, guardians to pass those very values and practices bequeathed on them to their children to maintain and keep the cultural heritage of Nevis alive.

“Our cultural heritage is the revelation of who we are as a people. It is the mirror through which others can see us up close.

“Our cultural heritage speaks to our beginnings, it tells of our history, it recounts our struggles, it shapes and informs our thinking and above all it is the very foundation of the lifestyle we have created and developed. If we ever lose this heritage, we will also lose our sense of being,” he said.

Mr. Hector said Nevisians all over the world had a solemn responsibility to hand over these virtues to their children so that they could fully understand and appreciate who they were, to preserve the very essence of their identity and assume their rightful places in history.

The Minister also said that apart from the importance of holding fast to their own cultural heritage, children born of Nevisian parentage, if they were to survive, should also be encouraged to learn about other cultures and grow to appreciate and accept the diversity in people from varying cultures.

He explained that in a changing world, it was incumbent on today’s children to operate as global citizens.

“Let us direct our children to look for careers beyond their own towns and cities. Let them know they much search for work in other regions and countries of the world. Challenge them to study beyond the limits of their own universities and encourage them to further their education in other parts of the globe.

“There is richness to be acquired and a wholesomeness to be obtained when one is exposed to the variety of cultures and customs this world offers. Let us not stifle our children’s progress. Let us not restrain their potential. Let us give them the freedom to explore their world and secure their rightful places in it,” he said.