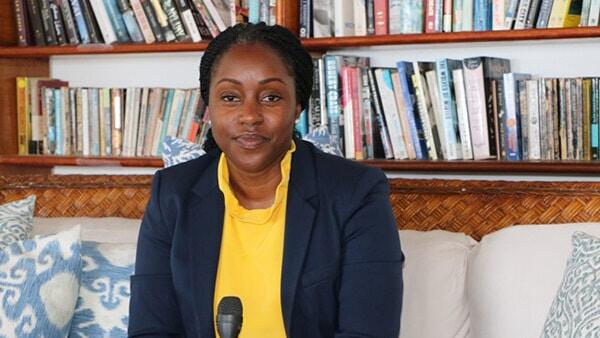 Dr. Tres-Ann Kremer, Adviser for the Caribbean Region and the Commonwealth Secretariat and Head of Good Offices for Peace is describing as timely, a two-day historic regional conference to be held on Nevis, for women and youth to assist with community dialogue, a tool successfully utilized in the fight against anti-social behavior.

The Commonwealth Secretariat official spoke to the Department of Information on June 24, 2019, at the Mount Nevis Hotel, one day before the start of the conference at which 90 participants from across the region and locally are registered to attend.

“The conference is timely in my view. Timely because it came firstly at the request of the government so, in that manner, clearly, it is of interest and priority to the country.

“This conference is focused primarily on two issues – youth driven crime and also gender-based violence, and the Commonwealth Secretariat is of the view that community dialogue is an essential mechanism. So we were very pleased that St. Kitts [and Nevis] also seems to hold this view and has requested that support from the secretariat and we are pleased to assist with that,” she said.

Dr. Kremer described community dialogue as an important mechanism to mitigate crime and violence among young persons, and how to address gender-based violence.

The regional conference draws together various stakeholders from different perspectives to have meaningful discussions on things that matter to the development and the governance structures of a country.

The regional conference which is the first of its kind to be held in the Caribbean region, is sponsored by the Commonwealth Secretariat in collaboration with the government of St. Kitts and Nevis. The theme is “Women and Youth Participation in Community Dialogue: South-South Approach for Peace and Security in the Caribbean.”

Meantime, Dr. Kremer commended the Government of St. Kitts and the Nevis Island Administration for working to strengthen existing structures dealing with the issues of youth-driven crime and gender-based violence.

“Congratulations on identifying the need to do something else and do something further to strengthen what you already have. Often times the mechanisms exist and the solutions usually exist on the ground in terms of national ownership.

“So congratulations in taking the steps to really enable this conversation as to what is necessary to assist you to strengthen those and moving forward looking for the community to pull together around the initiative and so we want to also commend the leadership of Minister Hazel Brandy-Williams and your Premier [Hon. Mark Brantley] and the Prime Minister [Dr. Hon. Timothy Harris] as well for really supporting the initiative,” she said.

The Commonwealth is a voluntary association of independent and equal sovereign states. Its members are bound together by respect for all states and peoples; by shared values and principles; and by concern for the vulnerable. The Commonwealth Secretariat is pleased to: