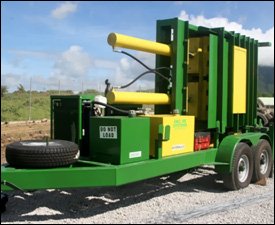 A call has come from General Manager of the Nevis Solid Waste Management Authority Mrs. Carlyn Lawrence, for consumers to consider a possible increase in annual garbage collection fees in support of the greater services afforded them.

In a recent interview with the Department of Information at the Long Point Landfill, Mrs. Lawrence said over the past few years the Authority had invested in new equipment and engaged new services to ensure a reliable garbage collection and disposal package.

“Five dollars per month for waste disposal is a donation, it does not match the service that is being rendered to the public.

“An increase would offset the operating cost of the Authority. I think the public has seen the improvement in the timely collection of their garbage,” she said.

Mrs. Lawrence pointed to the sharp increase in fuel cost which had also resulted in a spike in trucking charges.

“It cost approximately $10,000 a month for the diesel used for garbage collection. We run about another $10-12,000 to truck material to cover the household waste at the Landfill.

“We have seen sharp decreases in our income because of the closure of the Four Seasons Resort and the decline in visitor arrivals has resulted in a decrease in receipts from the $4 Environmental Levy,” she said.

According to the Authority’s General Manager, while the operational cost had increased they had operated with the same revenue over the past eight years with had declined in recent times.

Notwithstanding, Mrs. Lawrence said while the Authority had worked hard to not compromise the level of service offered, there was the need for at least two more garbage collection trucks and other equipment.

Similar sentiments were echoed by Minister of Health on Nevis Hon. Hensley Daniel who was on hand to witness the first export of derelict vehicles and scrap material exported to a recycle plant overseas. The event was a historic first for solid waste disposal on Nevis.

“I think in time the people of the country can conclude that based on the work we have done, that they could easily begin to accept that five dollars per month for garbage is untenable and unsustainable.

Mr Daniel cited that the $5 was a fee introduced nine years ago when the cost of fuel was likely half the price that it was today and there was half the waste generated at present.

“The Unit had to be outfitted with different kinds of equipment which costs a lot of money and I hope the people of Nevis say to me that we could increase the annual payments,” he said.

The Nevis Solid Waste Management Authority in a partnership with Scorpio Equipment and Services based in St. Maarten, last week diverted tons of waste material off the island.  Among the exported items were over 250 derelict vehicles, led acid batteries and scrap metal from a private source.

The Authority’s plan will soon incorporate the diversion of glass and plastic material all in an effort to prolong the lifespan of the Long Point Landfill and to minimise the demand for space to bury household waste.