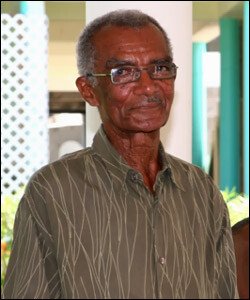 You can achieve regardless of age. That was the call Minister with responsibility for the care of the elderly Hon. Hensley Daniel made to the youths of Nevis, as he celebrated Nevisian Author and senior citizen Mr. Bertram Roach of Hamilton for his novel “Only God Can Make A Tree”.

Mr. Daniel told the Department of Information recently, he was proud of Mr. Roach’s achievement and offered public acknowledgement of his accomplishment.

“I am waiting for the young person to match Mr. Roach. He has a tremendous spirit, he lived in England for many years, he’s been back, and he’s in good health.

“What that must say to the younger people, is that if you develop a purpose in life and you work towards achieving that purpose you can do just about anything. Mr. Roach says to Nevisians you can achieve regardless of age,” he said.

Mr. Daniel who is also responsible for youth on the island urged young people to get busy instead of wasting time to get involved in crime, violence and drug abuse.

He also underscored the importance of the programmes implemented by the Department of Social Services – Senior Citizens Division, which he said were designed give the older population a sense of appreciation.

“I think the programme which we have set out to assist the elderly people and to celebrate them does send the message that they can write books too,” Mr. Daniel said.

The novel published by Athenia Press in the United Kingdom, tells the story of post slavery Caribbean life.

According to Mr. Roach, his book details the culture, festivities and realities of the period and place. It was set in St. Kitts.

“This is not the usual story of pirates and local stories. It tells of what happened to the offspring of the slaves and the mixture of the races.

“I grew up on a sugar plantation in St. Kitts and Nevis. The stories I tell are my real stories,” he said and added that he had already completed the manuscript for his second novel.

Mr. Roach is slated to travel to Antigua on Thursday to attend the Antigua and Barbuda International Literary Festival from November 7-9. He will have the opportunity to showcase his novel alongside prominent Caribbean, US, British and Canadian writers. Also in attendance will be publicists and publishers.

Mr. Roach was born on Bush Hill Estate to Montserratian Mr. Adolphus Roach who had migrated to Nevis in the 1900s to work as a manager at the Brown and Bush Hill Estates.

The Senior Roach later moved to St. Kitts to work as manager at Lavington Estate and later at Bell View Estate. Bertram, who accompanied his father, attended school in Tabernacle Village.