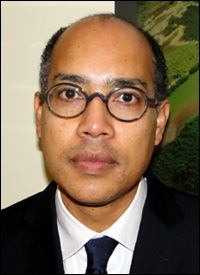 Nevis is seeking to have closer working relationships with the French Overseas Department of Guadeloupe in a number of areas including education, agriculture, geothermal exploration, and culture.

Premier, the Hon. Joseph Parry told the Department of Information that he met and held fruitful discussions on Monday, June 18 in Paris, France, with Ambassador Fred Constant, who is in charge of Regional Cooperation for the Caribbean and the Guianas.

“In France I met with the Ministry of Overseas and Regional Development and I discussed with the ambassador the possibility of a Memorandum of Understanding for cooperation in a number of areas” said Parry.

Premier Parry, who is also the Minister of Education in the Nevis Island Administration, said that their talks dwelt on the possible exchange of students and teachers. He was accompanied by the Financial Secretary, Mr. Laurie Lawrence and the Premiers’ Personal Assistant, Ms. Juliet O’Loughlin.

He explained that it was important that Nevisian students learn to speak French and for the teachers to be able to teach the language. He noted that this used to happen in the past but it stopped prior to 2006, and it is something his NRP-led administration wants to start again.

“But we want to go further than that,” said the Premier. “I have been informed that there are two universities in Guadeloupe offering tuition at US$300 a year, in addition to that you just have to find board and lodging. That is much cheaper than any other university in the Caribbean, including the University of the West Indies.”

He however advised that the universities in Guadeloupe are not offering scholarships, but his government is not asking for scholarships, saying it is only looking for the openings.

“In Guadeloupe they had the first geothermal plant in the Caribbean, so we are looking at seeing how we can have exchanges so we can learn from each other,” confirmed Premier Parry, whose NRP-led administration has pioneered in the area of renewable energy exploration in the OECS.

Premier Parry had been invited to address the St. Kitts-Nevis Investor Seminar hosted by Henley & Partners and the Consulate-General of St. Kitts-Nevis in Zurich, Switzerland, on Friday, June 15, which highlighted investment opportunities available in the Federation. On his way back to the Federation he stopped in France for the Monday, June 18th, meeting with the Ministry of Overseas and Regional Development.