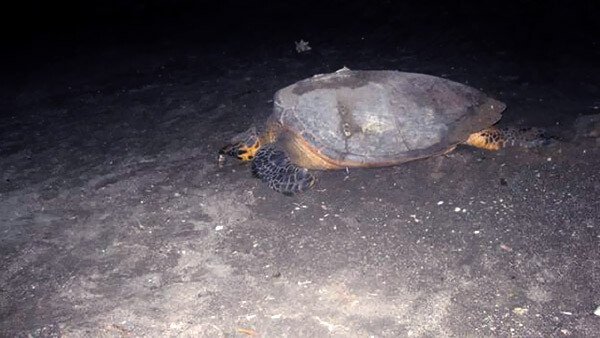 Members of the public must stop interfering with sea turtles which come to the island’s shores to nest or risk being caught, arrested, taken before the court and fined hefty sums of money.

“This is an offense under the Fisheries and Marine Resources Act 2016 and the Fisheries Regulation of 2002, and can result in you being fined and possibly even your vehicle being confiscated. The fine is $5,000 in the first place for one of the infringements of the law, and you are maybe infringing several of these laws at the same time like, for example disturbing nesting sea turtles that is $5,000.

“If you are charged multiple offenses – disturbing nesting sea turtles is one; taking the eggs that’s another; interfering with a sea turtle on the beach that could be another as well. So there are several offenses that you can be charged with. So we are encouraging persons not to interfere with nesting turtles because it’s a targeted fishery if you want to call it that, and it can result in the population in and around the island wiped out,” he said.

Mr. Pemberton explained that in the most recent incident at Cades Bay about 10:30 p.m. on October 10, in the vicinity of Marina’s Pub, members of the Nevis Turtle Group while on a turtle monitoring mission stumbled on the scene of a nesting turtle being taken from the area.

“The volunteers found a sea turtle tied up. It was dragged maybe 100 yards along the beach. The volunteers approached the area, and in approaching the area they saw a vehicle parked in the background. However, they didn’t see anybody, and they were not close enough to the vehicle so they could not see the number, most likely the persons that would have poached the turtle.

“The police almost caught them. As a matter of fact, the police were in the area and just came in probably a few seconds too late to catch them in the act of actually catching the turtle. So the turtle was freed and tagged and returned to the ocean,” he said.

The marine resources official said the incident was the most recent in a number of incidents concerning turtles over the last month and a half. In one case a turtle was poached, in another the eggs were taken, and in another some turtles were killed by dogs. During that period at least six sea turtles have been lost.

Mr. Pemberton advised members of the public to take note of vehicles anywhere close to nesting beaches during the night.

Three species of sea turtle nest on the shores of Nevis; the Hawksbill, the Leatherback and the Green. However, the data collected to date has confirmed that the majority of sea turtles nesting in Nevis are hawksbill turtles. The waters surrounding Nevis provide year-round foraging habitat for a fourth species of sea turtle, the Loggerhead. All of these species are considered endangered or critically endangered, and each is protected against international trade.

Hawksbill and Green turtles nest from April to November, while Leatherbacks nest from March to June. Hawksbills prefer to nest on beaches with natural vegetation, while both Leatherbacks and Greens prefer high energy beaches and nest in open sand.

The beach with the highest nesting density in Nevis is Lover’s Beach, adjacent to the airport. However, other major nesting beaches on the island are in the process of being identified. While poaching of turtle eggs and of adult nesting females is illegal under laws already in place, it remains an issue here in Nevis due to insufficient enforcement.