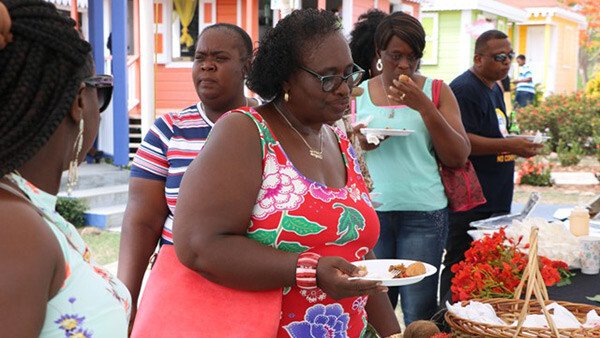 Mr. John Hanley, Permanent Secretary in the Ministry of Tourism, in the Nevis Island Administration (NIA) is describing the St. Kitts and Nevis Restaurant Week Tasting Showcase 2019 at the Artisan Village on July 20 as a sold out success.

The Tourism official spoke to the Department of Information on July 22, 2019, and gave his thoughts on the annual event, which in its 5th year, and designed to give participating restaurants the opportunity to showcase their dishes made with a theme ingredient to potential customers, and to stimulate activity outside of the tourism season. This year’s ingredient is coconut.

“Based on my observations, it was an outstanding success which received very positive reviews from patrons…Over 250 persons were in attendance at the event which was a sold out success. This was the largest turnout for the event on Nevis since first hosted some four years ago.

“Approximately 20 exhibitors were on hand ranging from newcomers such as Buju’s Place to experienced participants such as Nisbet Plantation and there was a wide variety of drink sponsors. Patrons were delighted by the wide variety of coconut-based offerings of the vendors which ranged from appetizers to main course samples to beverages,” he said.

This year’s event was hosted by the Ministry of Tourism at the Artisan Village. The area was created by the ministry in an effort to stimulate entrepreneurship among small artisans. That area was chosen to help increase public awareness of the Village as a venue for a variety of events.

Mr. Hanley noted that the feedback from the public about the suitability of the site was overwhelmingly positive, and the site offered the added advantage of allowing patrons to purchase items from the artisans during the event.

The St. Kitts and Nevis Restaurant Week, which is a collaboration between the Ministries of Tourism on Nevis and St. Kitts, is designed to promote the dining scene on both islands.

The annual activity on the tourism calendar in both Nevis and St. Kitts provides an opportunity to create linkages between agriculture and tourism. It also encourages the use of locally-produced food which not only has medicinal value but reduces leakages. The event is of benefit to the economy.

During the event remarks were delivered by Hon. Mark Brantley, Premier of Nevis and Minister of Tourism; Mrs. Carlene Henry-Morton, Permanent Secretary in the Federal Ministry of Tourism; and Ms. Kathleen Pessalano, National Coordinator of the St. Kitts and Nevis Restaurant Week.

Minister Lindsay Grant, Minister of Tourism in St. Kitts, was also in attendance. He was accompanying a contingent of about 25 tourism officials and their associates from St. Kitts.