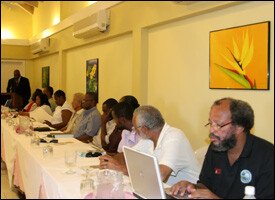 Nevis residents were advised against complacency with their use of water. Minister of Public Utilities and Natural Resources on Nevis Hon. Carlisle Powell made the recommendation when he addressed government department representatives at a Nevis Integrated Water and Costal Management workshop at Mount Nevis Hotel on Wednesday.

The event which was hosted by the Nevis Water Department in conjunction with the Caribbean Environmental Health Institute (CEHI) brought Nevis in line with other Caribbean islands that had embarked on projects to manage their water.

“Even though we have managed to keep your water flowing, the complacency should never set”What we have experienced is that the more water we put into the system, the greater the usage of water and so we have to keep increasing the supply and asking people to keep conservation in mind,Ã¢â‚¬ Mr. Powell said.

He explained that the business of water management was not solely that of the Nevis Water Department but every other department in the Nevis Island Administration (NIA) particularly in an island like Nevis where the water resource was limited with no lakes, rivers or major springs.

The workshop came at a time when Nevis was experiencing major expansions in its water systems. Mr. Powell disclosed that the NIA in conjunction with the Caribbean Development Bank (CDB) with the guidance of Permanent Secretary in the Ministry Mr. Ernie Stapleton, the replacement of old reservoirs which would increase storage by an additional 1.5 million gallons of water.

The added water would allow for a three day reserve supply of water in addition to the daily1million imperial gallons that was recently added to the water system.

Mr. Powell also noted that two new concrete plants would be commissioned at Long Point shortly which would require large amounts of water, so to would an oxygen plant under construction in the same area.

He also pointed to an expansion in agriculture, a sector which required additional water in times of drought and at best of times; the Agriculture Department along with the Island’s farmers required plenty of water.

The Minister explained that the NIA had planned to position new reservoirs in areas that would ably supply home owners on the higher elevations which did not feed into the government water supply system.