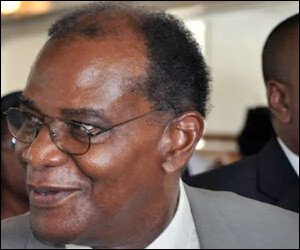 “Mr. Wendell Huggins loved Nevis and  he loved assisting Nevis people and empowering them to be the best that they could be. He was not a man who looked for public recognition, as his gratification came when the person reached their goal,” said Hon. Parry.

Other accolades and remembrances on the life of the former teacher, headmaster, permanent secretary, businessman and Nevisian icon, also poured into Thursday morning’s very popular radio program on Choice FM, and also on the Facebook social media.

Land surveyor and Nevisian businessman Dave Simon wrote: “My heart is heavy, today is a very sad day for me and for most Nevisians. I was awakened to the sad news of the untimely passing of my friend and teacher Wendell Huggins. Huggins will be missed.”

Barbra Jones, a Nevisian residing in New York, and former student of Mr. Huggins wrote:, ” I’m in shock and disbelief, I was home recently and we had a long chat, reminiscing about CSS. He was the principal that I loved most.”

Walter Clarke, formerly of Church Ground but now residing in Toronto, Canada, wrote: “We met in Toronto in the 70’s and became instant friends, may the Lord give strength to his wonderful wife and children.”

Bank Manager of the Nevis Development Bank, Miss Hyacynth Pemberton wrote, “I am happy that I was able to give him his praise in person on World Teachers Day in a speech thanking Mr. Huggins for years of mentorship and guidance.”

Mr. Huggins was born in the village of Webbe’s Ground, Gingerland, and never had the opportunity to attend high school. However, with sheer determination he purchased text books, and sat and passed exams with Woollsley College of England without being tutored. In the early 1970’s he entered the University of the West Indies, Cave Hill Campus in Barbados where he majored in History and Social Studies.

Huggins served the people of Nevis and St. Kitts in many capacities. He taught at the New River Primary School, was graduate teacher at the St. Kitts-Nevis Grammar School, and was later acting principal at the Charlestown Secondary School, and principal at the Gingerland Secondary School. His last posting was as permanent secretary in the Nevis Island Administration before he incurred the wrath of then- premier Vance Amory  in 1997 who unceremoniously sent him home in the “public interest”.

He later became a businessman, operating a store called Shevarelles on Government Road.

The home going service of the late Ronald Wendell Huggins will be conducted by Father Alson Percival on Saturday, January 10th at the St. George’s Anglican Church from 2:00 pm.

Among the many mourners, will be Prime Minister, the Rt. Hon. Dr. Denzil Douglas and former premier the Hon. Joseph Parry, who will deliver the eulogy.

The mortal remains will be interred at the parish cemetery.