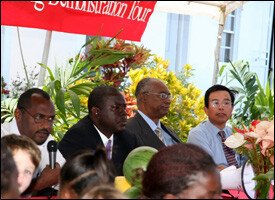 The Nevis Island Administration (NIA) has begun to reap rewards from its major investment in Agriculture in the latter part of 2006.

Permanent Secretary in the Ministry of Agriculture Dr. Kelvin Daly made the disclosure when he delivered remarks at the Taiwan Technical Mission’s Open Day at Cades Bay on Thursday. He attributed the success to a bold transformation of the sector through investment in human resources, modern equipment and the use of technology.

Notwithstanding, he said the Ministry and Department of Agriculture continued to work diligently and effectively to put a new face on agriculture on Nevis.

“The transformation involves significant investments in creating new farms and expanding existing ones. In 2007 over 90 acres of scrubland was cleared, fenced and put under production ““ 60 acres for cotton, 15 acres foor onions and 15 acres for fruit trees.

“In this one bold move, we doubled the amount of acreage under constant production. To date we have invested over $200,000 on these projects,” he said.

He said the sector which had experienced a declined interest in agriculture prior to an active recruitment drive, had resulted in 10 new farmers since 2006.

“The NIA’s generous concession and subsidy programme have encouraged the retention of both new and seasoned farmers. Duty free vehicles, equipment, farm supplies of every description, marketing, support and of course access to a well trained and diligent Extension service. The value of this farm support exceeds $5 million,” he said.

The move also succeeded in doubling the cold storage capacity at the Marketing Depot. As a result, post-harvest losses were reduced by over 80 percent with a commensurate increase of money in the pockets of the farmers.

Dr. Daly also pointed to the upgrades of the equipment at the Abattoir from fully manual to fully automatic.

“We recently acquired an automatic Hamburger Patty Former and Brine Injector and a 40 foot refrigerated container was donated by Mr. Andy Liburd. The transformation ushered in the construction of our new Agro processing Unit at the cost of $625,000.

He said in spite of the successes, it had been recognised that the benevolence of allied agencies, friendly governments and others would be required.

For 2009, the NIA engaged both the Taiwan Mission and the Caribbean Agricultural Research and Development Institute (CARDI) to form a partnership in the development of 50,000 pounds of sweet potato production by early 2010.

“CARDI will also be partnering with us in the development of protected agriculture systems, improved breeds of small ruminants and accessing new resistant coconut germ plants. Our friends at the Inter-American Institute for Cooperation on Agriculture (IICA) have assisted in outfitting the Agro Processing Unit with refrigeration equipment and in human resource training,” he said.