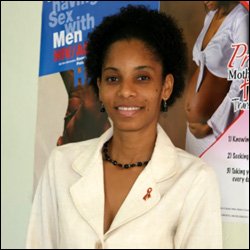 The Nevis public has been commended for their increased vigilance against the HIV/AIDS virus and their positive response to the Nevis HIV/AIDS Coordinating Unit’s programmes.

Acting Coordinator of the HIV/AIDS Coordinating Unit on Nevis Mrs. Nadine Carty-Caines who spoke with the Department of Information on Tuesday said the increase was an indication of more responsible behaviour, from persons sought to be informed of their HIV status in order to protect themselves and their families.

She said that statistics for the end of 2008 indicated a striking increase in the number of persons who had voluntarily come forward for testing.

“In December 2008 we had another National VCT Day and we had 81 persons who got tested and there was an increase of 14 more persons who came and got tested,” she said.

Voluntary Counselling and Testing is one of the outreach programmes of the Unit. It is done free of cost in a general setting with same day results, which gives the client peace of mind and less anxiety. Unlike at the Alexandra Hospital the tests, though free, have delayed results.

According to Mrs. Carty-Caines, for 2008 the confirmed number of tests done on Nevis was 1210. That included tests at the Alexandra Hospital Lab and the privately owned Avalon Laboratory.

She noted that among those who got tested in 2007, there were five confirmed HIV cases and so far for 2008 there were three. That number hung in the balance since they were awaiting the results of some tests that had been sent to other labs for verification.

Since testing commenced in Nevis in 1987 up to the end of 2008, there have been 62 confirmed cases of HIV infection.

Notwithstanding, Mrs. Carty-Caines expressed concern over the incidence of infection in women and she urged them to be cautious.

Among the persons who tested positive for the virus in 2007, there were three females and two males and among the number confirmed for 2008 two were females and one male.

“I want to emphasise that females are now surpassing men in terms of the rate of infection”¦Women need to take stock, they need to know the information. They need to listen to the informational sessions that we [the Unit] have.

“If we are not coming to you, you can always call us and let us know you need this information. You can do it in group session, through your church, whatever initiatives you want to take, call us [the Unit] we will come to you we love sharing the information,” she said.

Mrs. Carty-Caines explained that females were more susceptible to the HIV virus because of the make up of the female vaginal or reproductive area. “It’s easier for a woman to get infected versus a man even though men can get infected,” she said.

Meantime, the HIV/AIDS Coordinator listed a number of services offered by the Ministry of Health to persons who tested positive for the virus in Nevis. They included counselling, anti retroviral therapy and social work services.

She explained that persons who were infected with the disease could live a positive life with the assistance offered by the Ministry and said there was proof of that on Nevis.

Persons interested in seeking any kind of educational information could reach the Unit on Chapel Street (Nisbett Building) in Charlestown or at telephone number 469-8010.