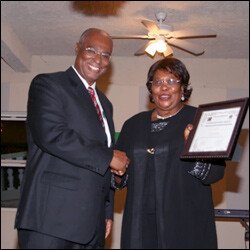 The honour was bestowed posthumously but Minister responsible for Community and Social Development on Nevis Hon. Hensley Daniel, said the renaming would keep her contribution to the people of Nevis etched in the island’s history annals.

“If we agree that education is the means by which we equip today’s generation for tomorrow’s possibility, Mrs. France has done that in Jessups, Barnes Ghaut and Cotton Ground.

Mr. Daniel told teachers that the renaming ceremony should serve as an inspiration to them, given the fact that in today’s society persons were discouraged from becoming teachers because they did not make much money.

He reminded the teachers that Mrs. France would have been one of the richest persons in the Parish of St. Thomas because she had a hand in the building and development of almost everyone in that community.

“It is probably important for us to rethink what wealth is. She was wealthy because she helped so many people to become wealthy.

“It must be an inspiration to teachers that to teach is to touch lives forever. Mrs. France has touched the lives of several people in the community and we could not, as a government, continue to speak to national development without making it real,” he contended.

The renaming ceremony was the second of seven historical sites on Nevis to be renamed by the Nevis Island Administration, in honour of eight local heroes who contributed selflessly to the development of Nevis. They were publicly acknowledged at an award ceremony on Heroes Day.

“I know that there are some people in Nevis who think that these ceremonies are not that important. I want to say to you that across the Caribbean a number of countries and governments are doing something similar and some of them have done that before. So we are right on target and right on track.

“Psychologists tell us that everybody has an invisible chain around his neck marked “make me feel appreciated”. I am sorry that we weren’t able to do it to Mrs. France while she was wearing the chain but”¦we have shoown our appreciation in this way,” he said.

The Minister advised teachers at the school that the best way they could remember Mrs. France was to continue programmes she had pioneered called “Reaching the Unreached’ and “Reaching Children Wherever They Are’.

He also told them that their task was to ensure that Mrs. France was immortalised by reaching young children wherever they were and to get them into preschool so that the efforts of Mrs. France could be celebrated tangibly.