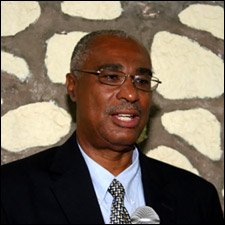 Taiwan Trip Not A Holiday Visit

Premier of Nevis Hon. Joseph Parry left Nevis on Sunday with Minister of Agriculture Hon. Robelto Hector for Taiwan, to deal with what he described as strictly matters of state.

He told the Department of Information on Friday that he wanted to make it clear to the Nevis public, that the trip was not a vacation but rather one that would deal with critical areas of interest for Nevis.

“We are going to Taiwan because we have to deal with the matter of the Fine Arts Theatre we have to sign the agreement for the funds”.

Mr. Parry further explained that the Taiwan Government had sought to get him to visit over the past two years but had declined citing that he had no interest in travelling there for a holiday.

He said on his return he would report to the people of Nevis what he had done while in Taiwan.