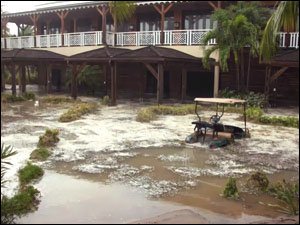 The Premier of Nevis, the Hon. Joseph Parry will be meeting with Four Seasons Resort stakeholders on Thursday, April 23rd, 2009 in Miami, Florida.

The Premier said that the meeting will facilitate discussions on the way forward with regards to the Four Seasons Resort Nevis and its restoration.

He further said that the NRP led administration had taken the initiative to be involved in any process that will ensure that the people of Nevis are appropriately looked after by the government they elected.

This is the second meeting Mr. Parry will attend with Four Seasons Resort stakeholders since the hotel’s temporary closure late last year.

The Hon. Joseph Parry will be accompanied by Legal Adviser in the Nevis Island Administration, Hon. Patrice Nisbett and Permanent Secretary in the Ministry of Finance, Mr. Laurie Laurence.