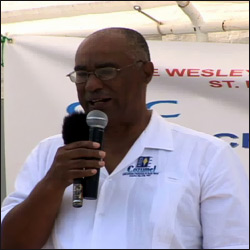 Nevis Premier, the Hon. Joseph Parry has re-affirmed the commitment of the Nevis Government to promote and continue inter-relations of Nevisians throughout the diaspora, for the well-being of its citizens living overseas.

Premier Parry, in speaking to Nevisians on his recent UK tour, urged nationals to use the Embassies, Consulates and attend meetings with government officials, “as a link to Nevis.”

“There are many services that they can be provided to you – from something as basic as applying for a passport, to providing assistance in times of major crises,” said Premier Parry.

“I appreciate visiting Nevisians and Kittitians residing overseas as many of you have ideas that could strengthen the cultural, economic or other linkages between the city or country in which you live, and the St. Kitts- Nevis embassies, consulates, tourism offices, and meetings similar to this one, are your linkages to home,” reiterated the Premier.

“Take the time to visit these offices. Attend meetings hosted by St.Kitts- Nevis government officials  Be sure to establish a relationship. These are the best ways for you to remain involved,” said Premier Parry.