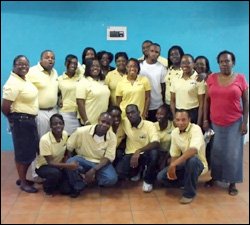 Premier of Nevis, the Hon. Joseph Parry told attendees at the H.O.P.E Nevis (Helping Our People Excel) Youth Rally at Cotton Ground on Monday that joining a gang would lead them on a path to nowhere.

The Premier, who is also a parent of four grown children, expressed the need for the young people to disarm themselves, as he reiterated his continued call for parents to spend quality time with their children.

“They need to put down the guns and knives and to talk about their grievances with their peers instead of killing one another”¦ as parents we must inform our children that we love them,” he said.

Mr. Parry pointed to the many social programmes which he said were introduced by Deputy Premier and Minister of Social Services, Hon. Hensley Daniel, in an effort to curb crime and gang activity on Nevis.

“These are challenging times in relation to young people, but my government is using numerous programs to encourage a more positive alternative to the gang culture on Nevis,” said Mr. Parry.

Among the initiatives included the Nevisian Pearls programme which was designed to assist at risk teenage girls; A programme of training for young men and women in Plumbing, Electrical Wiring, Blue Print reading and the Empowering Men for Change Programme, which targets young men who were not high academic achievers but have other skills needed to secure employment.

There was a lighter moment when entertainment was provided by King Meeko with a message of peace and 14 year old Brianca Jeffers sang a song of Unity.

Mr. Anthony Nisbett delivered a moving prayer for love, hope and unity, while the President of H.O.P.E Nevis, Mr. Ron Daniel gave positive words of healing to those touched by recent gang activity.

He used the opportunity to invite the youths to join his organization in its quest to help the people of Nevis.

“H.O.P.E Nevis continues to uphold the mantra and fulfill our mandate, we encourage everyone to get on board and join in as H.O.PE Nevis continues efforts of helping the people of Nevis Excel,” he said.

The rally was attended by a cross section of Nevisians, included members of the clergy and politicians. Speakers at the event united in a common effort to encourage and admonish the youth to strive to become law abiding and productive citizens.