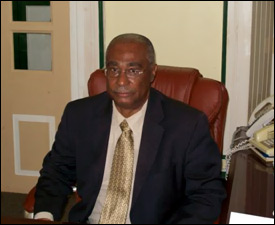 Premier of Nevis, the Hon. Joseph Parry will leave the Federation on Monday, September 29th to meet with Premier and Minister of Tourism in Bermuda, Dr. Ewart Brown the following day.

Premier Parry will be accompanied by Permanent Secretary in the Ministry of Finance, Mr. Laurie Lawrence.

According to Premier Parry, Bermuda has done very well in Tourism and Financial Services and he is very interested in identifying strategies for developing both sectors on the island of Nevis.

Premier Parry and Mr. Lawrence will have discussions with officials in related Ministries.

Besides having talks with these officials, Premier Parry and Mr. Laurence will meet with representatives of Bermuda’s Financial Services sector.