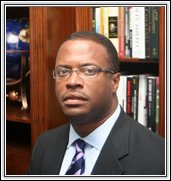 Premier of Nevis, the Hon. Joseph Parry pointed out fundamental errors and poor mathematical skills of Federal Parliamentarian, the Hon. Mark Brantley, when he (Brantley) scrutinized the 24/76 Value Added Tax (VAT) sharing agreement between St. Kitts and Nevis.  The Premier highlighted the blunder by Mr. Brantley, during an edition of “In Touch with the Premier” on Choice 105.3 FM on Tuesday morning.

Mr. Parry noted a statement by the Hon. Mark Brantley in the Federal Parliament recently:

The Premier laughingly said, “If the gentlemen calculated correctly based on the figures given, the Nevis share of the Federations population would be 24.30% (to two decimal places),” said the Premier.

In a clip from the Federal House of Assembly which the Premier aired on his program, the Hon. Brantley stated: “The Country Poverty Assessment (CPA) also indicates that Nevis has 4,184 households. St. Kitts has 11,927.  Nevis then has 35% of the households in the Federation.”

The Premier again lambasted Mr. Brantley by addressing the Opposition members “poor computational exercise” by noting that based on the figures given, Nevis’ share of households in the Federation would be 25.97% (to two decimal places) not the 35% indicated by Mr. Brantley.

Mr. Parry asked, “What conclusion can anyone come to with this matter”¦either Mr. Brantley does not understand mathematics or economics, or is he just being reckless and willful?”

According to the information collected by the IRD, when all the figures are calculated,  Nevis received a total of $3,712,529.24 with Nevis having contributed a total of $2,449,070.05 to the pooled resource.

It was clearly established by the Premier that the people responsible for working out the VAT revenue sharing formula are well trained in both economics and statistics.

Premier Parry concluded, “I want to reiterate to the people of Nevis that the figures at every angle, come out at about 24-26% when taking into account total population of St. Kitts-Nevis and total households in St. Kitts-Nevis.  It is simple mathematics and simple ratios”