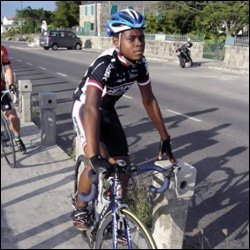 “This young man has been showing hints of his potential for the last year, now he has won his first event and got his name in the record books,” said cycle race Sponsor, Mr. Greg Phillip.

The road race was part of a week of events which celebrated Tourism on Nevis. It was also an opportunity to introduce a new cycle club to the general public, founded by returning national Steve Ward. The Queen City Cycle Club (QCCC) is youth based with four of its athletes on show in the weekend race.

Race organiser and sponsor Greg Phillip said, “As the president of the SKN Cycling Federation it is a joy to see yet another new cycle club being formed here on Nevis, the future of the sport looks more and more secure each day”.

Though 14 yrs old, Assim has been racing with the elite riders for the past year, his mentor and coach, Mr. Reggie Douglas commented, saying that Assim has been working for this win all year and he rode a great race, “I congratulate him 100percent!”.

The course for the event began on Hunkins Drive on the Charlestown Waterfront down to the Four Seasons and then back through town to complete one lap, In the sixth lap elite race (30kms) Assim took 1st, Alex Isles 2nd and Reggie 3rd, the junior riders were required to do 3 laps (15kms) and it was a clean sweep for the Queen City Cycle Club with Donique in 1st, Zavan Butler 2nd and Dorez Daniel 3rd!!

“Congratulations go out to all the riders young and old who took part, Gordon “˜Doc’ Avery was in there fighting with the juniors, demonstrating to the max that you are as young as you feel but the day has to belong to a certain young man from Newcastle, who made his village and his mom very proud indeed, very well done Assim, keep it up,” said an excited Mr. Phillip.

The next event is the Tourism Week Mini-Triathlon sponsored by GMP Graphics & Printing to be held on Saturday 13th at Pinney’s Beach from 3:00 pm.