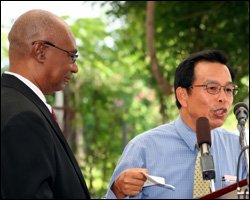 Hon. Joseph Parry thanked the Ambassador for his work in Agriculture, Education, and Crime Prevention on Nevis.

Ambassador Wu began his tour of duty in early 2008, as the resident Taiwanese Ambassador to St. Kitts-Nevis.

“He has aggressively built on the projects and programmes initiated by Taiwan and undertaken new initiatives that have further deepened relations between our two countries,” Mr. Parry said.

Those initiatives included increased links between Nevis and Taiwan through the assistance in the growth of Agriculture on Nevis; the availability of scholarships for Nevisian students to pursue University education in Taiwan and financial assistance with a number of projects that would support Crime Prevention on the island.

During the brief meeting, attention was given to the development of programmes that would assist Nevis further in the area of Education.

Mr. Wu said he was honored to have served Taiwan as Ambassador to St. Kitts- Nevis, which had led to the further strengthening of mutual ties based on common values and beliefs.

His departure leaves room for the appointment of a new Taiwanese Ambassador to the Federation of St. Kitts and Nevis.