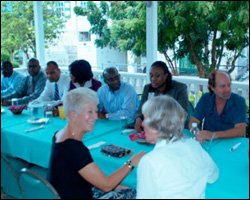 Members of The Nevis Chamber of Commerce & Industry

Premier of Nevis, the Hon. Joseph Parry addressed a luncheon of the Nevis Chamber of Industry and Commerce (NCIC) at The Patio Restaurant in Charlestown on Wednesday, April 15th, 2009.

The Hon. Joseph Parry discussed the topic: Efforts of the Nevis Island Administration, to soften the impact of the global recession on the economy of Nevis.

“We are well aware that there is a real recession that has affected the islands of St. Kitts-Nevis negatively.  We can not overlook the fact that the closure of the Four Seasons has also affected both islands greatly. I am hopeful, though, that the glimmer of light that the United States President, Mr. Barrack Obama has talked about is really present,” said Premier Parry.

According to Premier Parry, when the Nevis Reformation Party (NRP) led government came to power, their approach was to come to the administration with a manifesto of vision, development and people empowerment.

“The focus of our manifesto was investment of our people with proper training and education which would help Nevisians go forward and upward,” said Premier Parry.

The NRP led government also put heavy investment in road expansion across Nevis, because, as the Premier said, it would help to open up the island, which would lead to the island’s progress.

During the luncheon, the Premier said his administration allowed the St. Kitts ““Nevis Sea Bridge to ferry between the two islands and the administration also developed the Drag Raceway in the St. James’ Parish.  The vision of the projects was to bring growth, because as the Peninsula develops, it will benefit Nevisians with jobs and easier movement between St. Kitts and Nevis.

While discussing the drag race strip the Premier discussed the creativity of the economic impact on Nevis. People from St. Kitts, Antigua, Saba, Statia, Anguilla, St. Maarten and other islands, have visited the drag race strip and evidently spent money on the island.

“It is not about gate receipts,” he said.  “When looking at the impact of the drag racing, we see that it has not only brought in a source of entertainment, but it has also brought in revenue by visitors using the guest houses, purchasing food, drinks, utilizing car rentals and local mechanics for car up keep . These are all examples of the tourism growth in Nevis because of the raceway,” said the Premier.

In terms of other developments, the Premier noted that the Caribbean Development Bank’s poverty assessment team claims that the closure of the Four Seasons Hotel had less of an impact on Nevis than St. Kitts.  He went on to say that he is not totally clear on why the impact has been less for Nevis, but he believes that his early warning of an imminent lay off of Four Seasons staff, prepared the workers to save, get another job and simply get ready for the property’s temporary closure.

It is important to note that the industries brought on by the NIA such as the Brown Hill Communication Call Centre and the development of the Cherry Hill Gardens Housing project have also helped to soften the impact by securing employment for about four hundred persons on Nevis.

The Premier concluded that the development of geothermal energy on the island is a positive thrust for the people of Nevis, as his NRP led cabinet continues to put in place important infrastructure and sustainable economic growth on the island.