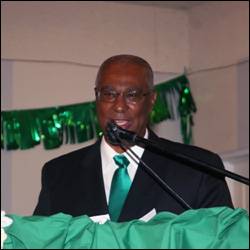 Premier and Leader of the Nevis Reformation Party (NRP), the Hon. Joseph Parry acknowledged the stalwarts of the Party at its convention held at the Occasions Event Center on Sunday.

“This weekend we celebrate 40 years of the Nevis Reformation Party.  We celebrated with pageantry and in song and as we do, we are compelled to draw the picture of Nevis 40 years ago and Nevis today,” commented the Premier.

The NRP leader asked the audience to reminisce on the parade of great men and women who sacrificed and built Nevis.

The Premier mentioned some of the outstanding persons who helped start the party and gave Nevis the “foundation” it had today.  The names included Mr.Uhral Swanston, Mr. Round Liburd, Mr. Horace Liburd, Mr. Ivor Stevens and Mr. Levi Morton.

According to the Premier, it was important for those who could, to remember the days of poor roads, an irregular water supply, the state of the electricity supply, education, health services and the availability of jobs.  He reminded the audience that it was a time of emigration to England, Canada, America and the Virgin Islands.

“Today, as we examine the change and admire the great network of roads, the present state of the water supply, electricity, housing, construction, health and education, we can claim with genuine pride that Performance Matters”, stated the Party leader.

During the Premiers address, he asked the members of the Nevis Reformation Party Youth Arm to stand to a thunderous applause from the floor.

“For the first time, the young people have been asked to be represented at the Convention and I am pleased to identify with these young people.  As a Party and Government, we have listened and today I am pleased to see the flower of Nevisian youthful pride before us,” said the Premier.

Mr. Parry stated before the large audience, that he had witnessed the young people come on stage and introduced their Ministers of Government, debated issues and asked questions of the future development of Nevis.

“The young people more than any of us understand that Performance Matters. Performance for them is not about appearances but delivering the services that enhances life in this country,” said the Hon. Joseph Parry.