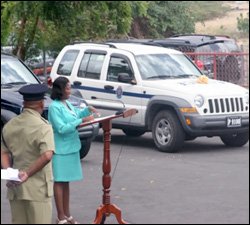 The mobile capacity of the Nevis Division of the Royal St. Christopher and Nevis Police Force was enhanced on Monday, thanks to a gift of five new Jeeps from the Nevis Island Administration (NIA).

Permanent Secretary in the Premier’s Ministry Ms. Angelica Elliott during remarks at the handing over ceremony at Bath Hotel said the gift was a direct response from a request to Premier of Nevis Hon. Joseph Parry who is also responsible for Security, by Inspector Hilroy Brandy at a police briefing in January.

“He did a great job of painting a dire picture of their lack of vehicles to which the Premier promptly responded Ã¢â‚¬ËœBrandy you will have your vehicles’.

“In that statement the will had been declared, it was then the Ministry’s task to find the way. However, the driving force behind that way has been the Premier Hon. Joseph Parry,” she said.

Ms. Eliott underscored the Administration’s continued commitment to the preservation of public order and security, as it continued to demonstrate its commitment and support to the police in their efforts to ensure public safety.

She said in spite of all the NIA’s constant assistance to the Police, crime continued to rear its ugly head in the society and was of major concern to the NIA.

With regard to the latest gift, the NIA Official implored the Lawmen to care for the vehicles both old and new and any other government vehicle which was entrusted to their care in the performance of their duties.

She also had strong words of caution for the Officers, citing that the expectation of the Administration and the public was that the new vehicles would not be used for leisure and pleasure but would be utilised to increase the Division’s capacity to respond to emergencies in a timely manner and to patrol more effectively.

Meantime, Ms. Elliott pointed to the many occasions the NIA had come to the assistance of the Nevis Police Division over the past four years. She said the Administration had recognised the voice of the Police on Nevis, understood their call and responded positively to their cry. During that period, she said, they had enjoyed an unprecedented period of enhancement.

In October 2006, the Administration was called upon to provide alternative accommodation for the Cotton Ground Police Station and later this year a new edifice would also be constructed to house that facility.

In February 2007 the NIA was also called upon to commission the Gingerland Police Station and according to Ms. Elliott, in January 2008 they again came knocking. This time they requested a new stove and a brand new five burner cooking appliance was provided for the Charlestown Police Station.

In July 2009, the Police sought assistance for mattresses and the Administration provided 36 new ones to the Division.

“Even though we are three and a half months into 2010, yet they have come knocking and so we have increased the number of police men on Nevis by seven officers. At the back of me you are seeing the ongoing construction of the barracks which will give us a total of 16 rooms here at Bath Plains.

“Also there are barracks being built in Butlers which will give us eight rooms and now we are seeing an increase in the number of vehicles allotted to the Nevis Police Division,” she said.