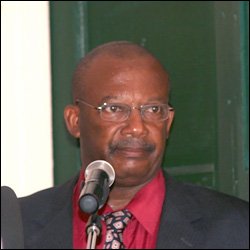 Members of the Strategic Group, Nevis Police Division of the Royal St. Christopher and Nevis Police Force were commended for their sustained efforts with stakeholders to make Nevis and by extension the Federation a safer place.

The praise came from Police Commissioner Mr. Austin Williams when he delivered remarks at the seventh annual Police Constables Appreciation Awards 2010 on Saturday. The event hosted by the Strategic Group, was held at the Old Manor Hotel in Gingerland, with the theme “Safer Communities through Partnership”.

The Strategic Group was formed in 2001 to strategise and plan ways and means to reduce crime and forge a partnership with the community.

He told the Group though he was aware of the many challenges faced by the Nevis Police Division with regard to safety and security, he wished to be frank and open about the matter.

“It is only through this mature and transparent dialogue we would be able to collectively tackle these rising scourge of violent crimes that Nevis is not accustomed to.

“This is in no way an attempt to discount the hard work of the men and women of this Division but it is a reality check for all of us that we should not rest on our laurels but rather continue to be innovative and consistent in the delivery of a high quality policing service,” he said citing that they had worked extremely hard and many times their contributions had gone unnoticed.

It was for that reason that Commissioner Williams praised the group for having organised the appreciation ceremony which he described as significant and timely.

However, the Federation’s Top Cop also had words of gratitude to the nine awardees.

“You must be highly commended for your dedication, courage and seemingly untiring efforts under some of what could be considered very dangerous and unwelcoming circumstances of work. Putting your lives on the line for the citizens of this Federation is no triviality.

“The countless hours you spend tracking down the criminal elements and ensuring that they are brought to justice have not gone and will not go unnoticed,” he said.

Notwithstanding, Commissioner Williams told the awardees though they should be proud of their achievements, he challenged them to continue to be a beacon and a shining example of what conscientious and professional service could yield.

He also urged them to continue to work assiduously as the glow and glory of their award faded, whether or not some tangible reward was publicly given to them.

The Commissioner used the opportunity to acknowledge the family support of the police officers who he credited with for being their pillows of strength.

“It would be somewhat unconscionable not to recognise those who have been your pillows of strength, your strong tower. I speak of none other than your families”¦The job of the Police is not the safest job on earth and so one can only imagine the stress and discomfort that some family members go through on a daily basis.

“Yet if it were not for your love and support and encouragement, our success would not even be half of what it is today. I therefore take this opportunity to thank all the families and well wishers for lending you to the country we all love so dearly,” he said.